La Finale is the name of the very last Bugatti Veyron 16.4 that´s built. Since the start of the production in 2005, several special editions were built in the factory in Molsheim. In the following article we look back at the special editions which are made of the legendary Bugatti.

Bugatti Veyron 16.4 Pur Sang
The essence of perfect. That´s what Bugatti names the Pur Sang which is limited to five copies. It´s one of the prestige projects where Bugatti refers to the history. Ettore Bugatti was always looking for something new, he wanted to experiment with materials. Carbon fiber and aluminum are important for the development of the Veyron 16.4 and that´s why Bugatti choose for a combination to show the essence of the Veyron 16.4. A bare carbon fiber bodywork with polished aluminum had to show the unique character of the supercar. The Pur Sang is one of the most expensive Veyrons ever built with a price tag of 2.5 million euros. 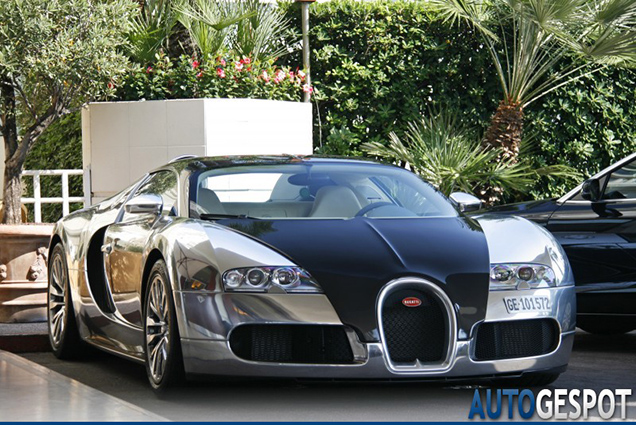 Bugatti Veyron 16.4 Sang Noir
During the introduction of the Sang Noir, which is limited to 15 copies, Bugatti showed the beautiful 57S Atlantic next to the Sang Noir. They created synergy between the current and the past. The Sang Noir shows a more dark side of the 1.001 hp strong Veyron. According to artists the night is more vivid and colourful than day and this theme is processed in the Sang Noir. All components are black and partly carbon fiber. Several chromed components colour the exterior on a great way. The interior is beautiful finished with Tangerine coloured leather and piano black painted components. The Sang Noir is still one of the most beautiful Veyrons. 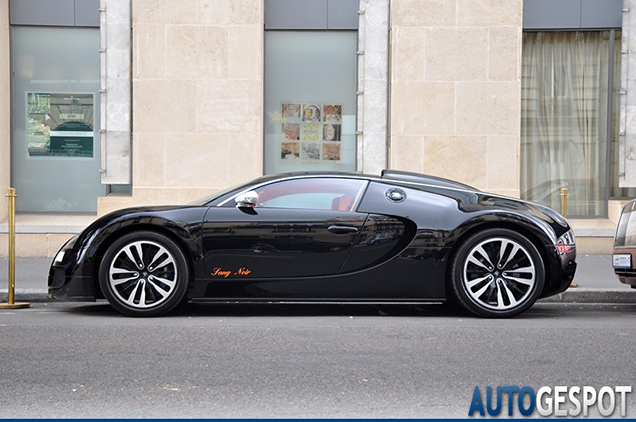 Bugatti Veyron 16.4 Fbg par Hermès
One of the cooperations of Bugatti was with Fbg par Hermès. In 1837 the French company was founded as a specialist in luxurious products and equestrian. The link with the grill in the shape of a horseshoe is immediately explained. The chic fashion brand still has aristocratic customers and a cooperation between these companies was a great idea. The Veyron 16.4 Fbg par Hermès has a unique colour composition with the colours Ebony and Brick. Unique details are the changed grill and adjusted door handles in the interior which look more traditional. Some subtle decorations on the exterior and interior refer to the cooperation between the French brands. 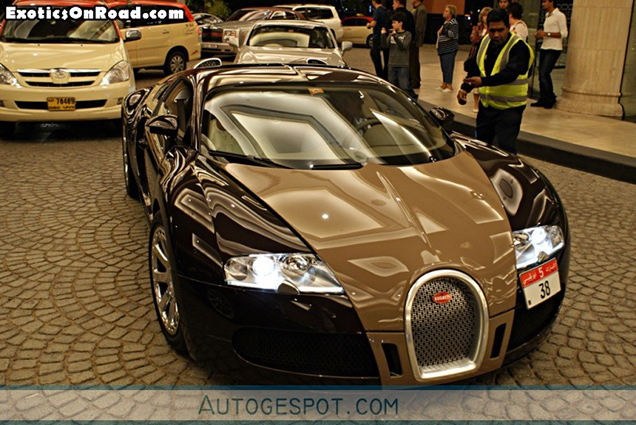 Bugatti Veyron 16.4 Bleu Centenaire
2009 was time for a party in Molsheim. Bugatti celebrated its 100th anniversary and that’s why they came up with a one-off. The Veyron 16.4 Bleu has a unique combination of the famous Bugatti blue colour in a two-tone composition, glossy and matte. Next to that, the Veyron has chromed components which add the contrast of the beautiful blue colour. Next to this one-off, Bugatti came up with another four copies which honor four important persons in the history of Bugatti. 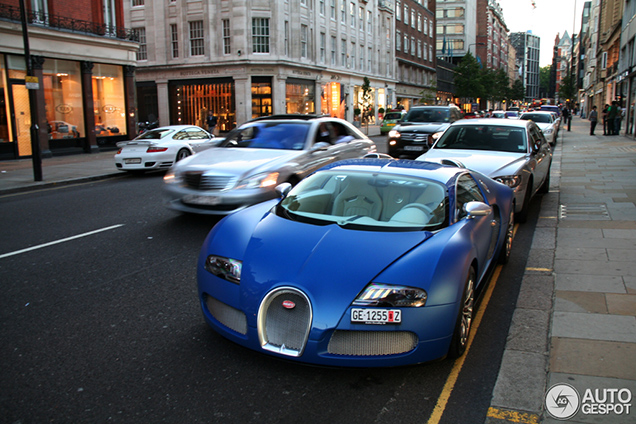 Bugatti Veyron 16.4 Centenaire Achille Varzi
Achille Varzi was a very successful driver who died at a very young age of only 43 years old. Big successes were his victory in the Mille Miglia in 1934 and a year before he won the Monaco Grand Prix and he also won the Targa Florio in 1930 and 1934. His first years he used to drive for the Bugatti racing team and in the thirties he transferred to the Maserati racing team where he was also very successful. This Centenaire Edition is a homage to his victories with the Bugatti racing team. Eventually Achille participated in 139 races of which he won 33 races. This copy is painted in red because his Bugatti Type 35 was painted in the same red colour. 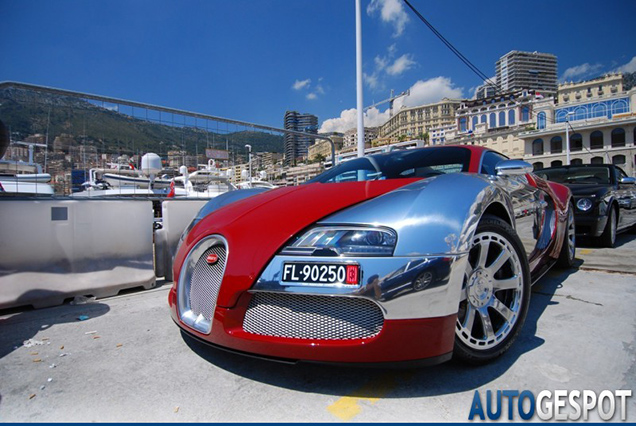 Bugatti Veyron 16.4 Centenaire Jean-Pierre Wimille Edition
Jean-Pierre Wimille has a very special place in the history of Bugatti. Back in 1937 and 1939 he managed to win the 24 hours of Le Mans. First with a 57G Tank and later wit the 57C Tank. Next to that he won the Boi de Boulonge Race in a Monoposto Type 59/50B in 1949. The Edition honors the golden years in Europe where Bugatti was really successful. A special detail are the wheels in which the design of the racing Bugattis is processed.

Later, Bugatti introduced another Jean-Pierre Wimille Edition based on the Grand Sport Vitesse in the Les Légendes Series. 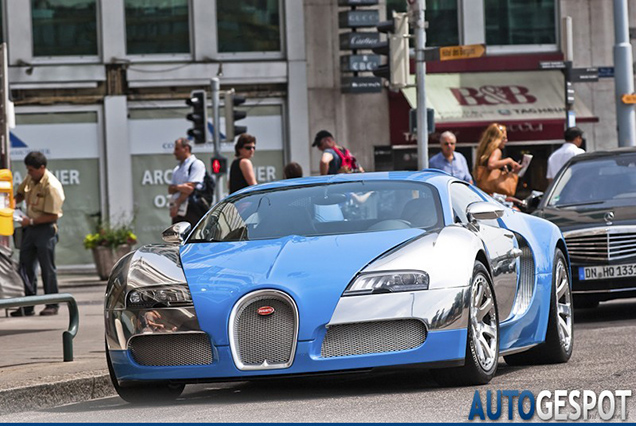 Bugatti Veyron 16.4 Centenaire Hermann Zu Leiningen
Born as a royalty, Hermann Zu Leinigen started as a test driver in Detroit in the United States. After he returned to Germany he bought a Bugatti Type 40 chassis for a conversion to a racing car. Later he switched to a Type 37 A which resulted him in several victories as a private driver. In 1930 he bought a Type 35 C with which he added himself to the list of famous drivers from that era. Prince Hermann zu Leiningen was young, brave and perfectly matched to Bugatti. In addition to other famous drivers he passed away at the age of 70 years old in 1971. 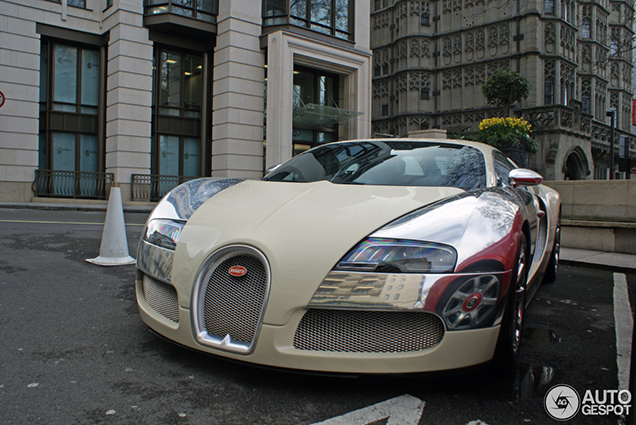 Bugatti Veyron 16.4 Grand Sport Sang Bleu
Pebble Beach is often used by Bugatti to unveil their one-off Veyrons. This also happened in 2009 with the Sang Bleu. It’s one of the first Veyrons where Bugatti used a lot of carbon fiber to give the supercar a sporty character. Next to all these blue colours, this Veyron Grand Sport is also fitted with special wheels in a Midnight Blue and Diamond Cut two-tone colour. Sang Bleu is the French translation for ‘blue blood’ which means you’re noble. While the Veyron was introduced in the United States it ended up with a Swiss owner. 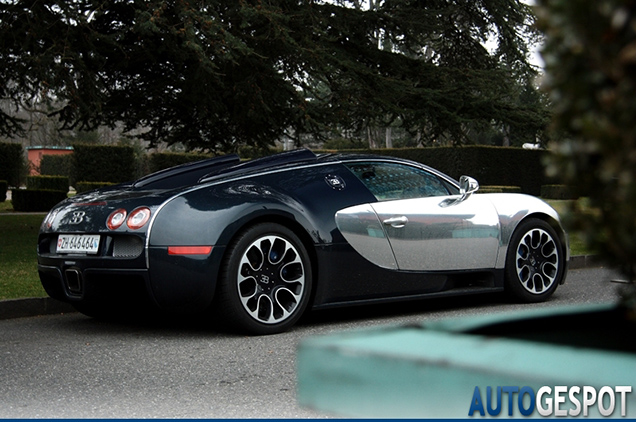 Bugatti Veyron 16.4 Grand Sport L'Or Blanc
Just like the Fgb par Hermès, the L’Or Blanc is a cooperation with a traditional company, Königliche Porzellan-Manufatur Berlin and together with Bugatti they build a one-off. Bugatti is known for realizing exceptional ideas where the best quality is pursued. Ettore Bugatti was somebody who loved to experiment with new materials. That’s why the L’Or Blanc is a car that perfectly matches Bugatti’s history and heritage. The unique paint is created in the room where the Veyron is painted, the patters are the shadows of the lights. The white paint has a very deep gloss to make it look like the lacquer is really from porcelain. Painting this car takes two weeks and consists five layers of lacquer. The blue lines are all handmade. Next to the artistic blue lines Bugatti also used real porcelain. The EB logo at the back of the car has a small layer of porcelain just like the inner side of the wheels and the gas cap. In the interior we also see some porcelain including as porcelain elephant which is processed in the leather. The brother of Ettore Bugatti designed this elephant and we can find this elephant on the grill of several Bugattis. 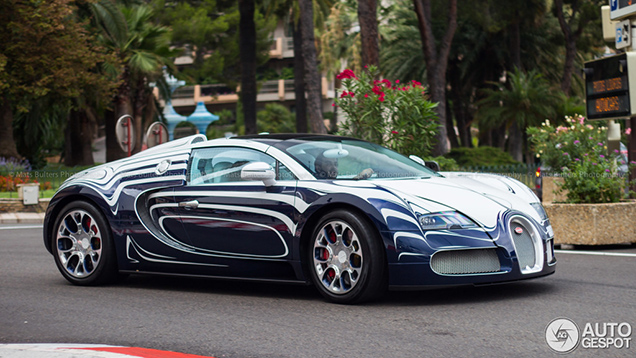 Bugatti Veyron 16.4 Grand Sport Wei Long 2012
In 2012, Bugatti again cooperated with Königliche Porzellan-Manufatur Berlin. The Wei Long Edition was realized for a Chinese customer to celebrate the year of the dragon. The Wei Lon Edition has a unique colour composition with pearl white and red. The exterior has some Chinese characters and details with a porcelain layer. These details are the heart of the wheels and the gas cap. In the interior we also see some dragons. We see dragons being processed in the seats and between the seats. The interior has a powerful red colour which strengthens the powerful character of the dragon. 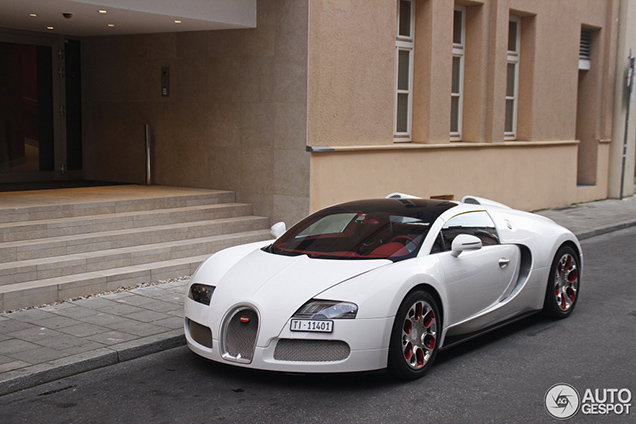 Bugatti Veyron 16.4 Super Sport L'Edition Spéciale Record du Monde
Back in 2010 Bugatti did it again, they set another world record as the fastest production car in the world. That’s why they built five copies of the L’Edition Spéciale Record du Monde in an outstanding composition, orange and black. The beastlike Super Sport pushed the limits at Volkswagen’s test track. The car reached a top speed of 434,211 kph. The sprint to 300 kph took fifteen seconds. A plaque in the interior has Bugatti’s test driver Pierre-Henri Raphanel’s signature on it. 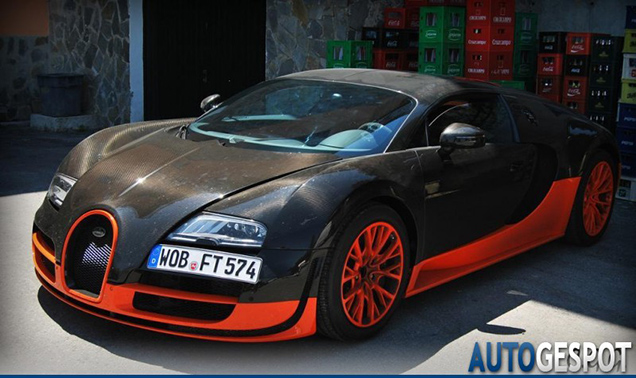 Bugatti Veyron 16.4 Grand Sport Vitesse World Record Car Edition
Bugatti managed to reach a top speed of 408,84 kph in the open version of the 1.200 hp strong Vitesse. That happened at 6 April 2013. Reason for another World Record Car Edition. Eight copies were built of which 1 copy can be found in the Netherlands. The Dutch owner uses his Veyron very often, just like you should. Every time the owner gets into the car he’s remembered that this is a special version thanks to the plaque in the car. 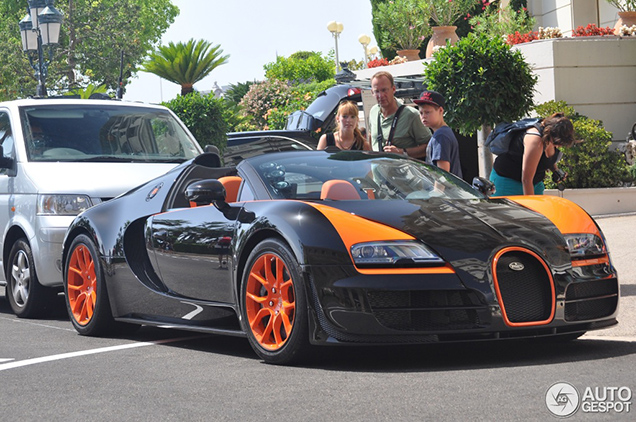 Bugatti Veyron 16.4 Grand Sport Vitesse Les Légendes Black Bess
The Légendes is an impressive series of six models where Bugatti refers to the history of the brand. Bugatti built three copies of every version. The series can be seen as the final chapter of the Veyron before the La Finale.

The Type 18 ‘Black Bess’ is known in the history books as one of the first street legal supercars. It’s one of the most important pre-war Bugattis which was way ahead of its time. A five liter four-cylinder engine produced over 100 hp and the car had a top speed of 160 kph. That’s incredible for a car from 1912. Founder of the company, Ettore Bugatti managed to win the Mont Ventoux Hill Climb in a Black Bess in 1912. The bodywork of the Black Bess Vitesse is made out of carbon fiber but is painted in black. With 24 carat gold accents, the car refers to its predecessor. 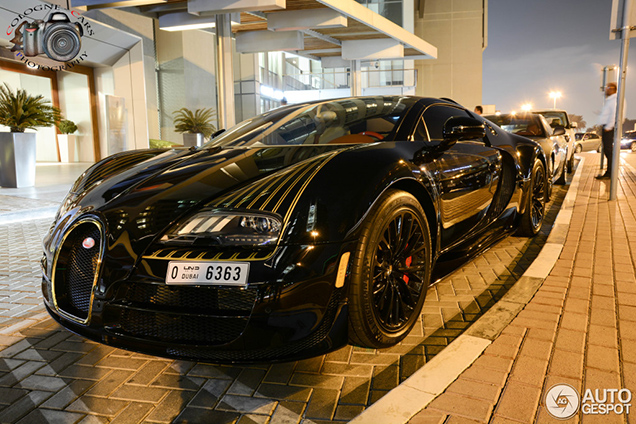 Bugatti Veyron 16.4 Grand Sport Vitesse Les Légendes Meo Costantini
Bartolomeo 'Meo' Costantini was a close friend of Ettore Bugatti and double winner of the Targa Florio. He was head of Bugatti’s racing team for eight years. The Vitesse ‘Meo Constatini’ reminds us of the Type 35, a very successful sports car in that time. Bugatti built three copies of this 1.200 hp strong Bugatti which has a price tag of 2.009.000,- euros excluding taxes. The blue carbon fiber bodywork is reference to the historical blue colour of French racing teams. A second option was the choice for the new colour ‘Bugatti Dark Blue Sport’, which was developed especially for this model. The combination of chrome and blue is still a great combination on a Veyron. 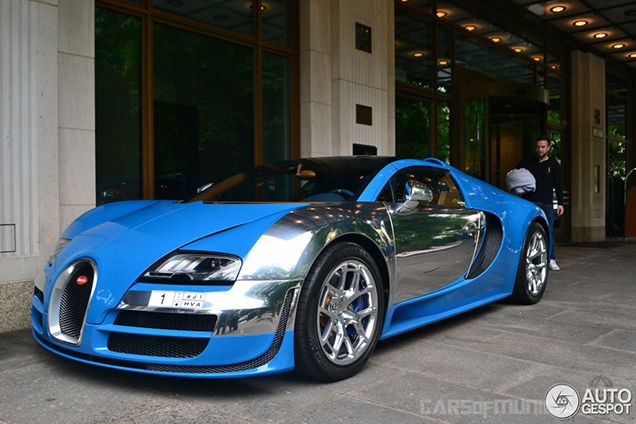 Bugatti Veyron 16.4 Grand Sport Vitesse Les Légendes Rembrandt Bugatti
The Rembrandt Bugatti is the only Les Légendes of which all three built copies were spotted. Rembrandt was the brother of Ettore Bugatti, the founder of the company. As an sculptor he had a very artistic look at the world and that’s what Bugatti wants to show with this model. Remarkable detail is the elephant in the interior. This is the most unusual model in the Les Légendes series with its brown colour. This colour is very rare on cars and especially on supercars like a Bugatti Veyron. 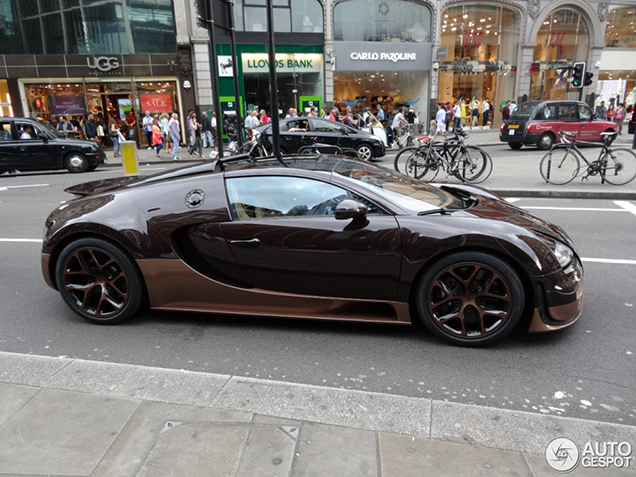 Bugatti Veyron 16.4 Grand Sport Vitesse Jean-Pierre Wimille
Jean-Pierre Wimille is the only person which who is honored two times in a special limited model. After the Centenaire in 2009, the Les Légendes Jean-Pierre Wimille is introduced at Pebble Beach in 2013. Again, the Veyron is painted in the same blue colour as the T35 Bugatti. The colour is blue carbon fiber with a soft white lacquer. Next to that ’Wimille light blue’ is added for some contrast. In the interior we see the same colours and between the two seats we see the track of Le Mans which is processed in the center console. At the spoiler at the back we see a silhouette of the track but unfortunately you can’t see this on the photos of this spot. It are the small details that make this Bugatti so special. 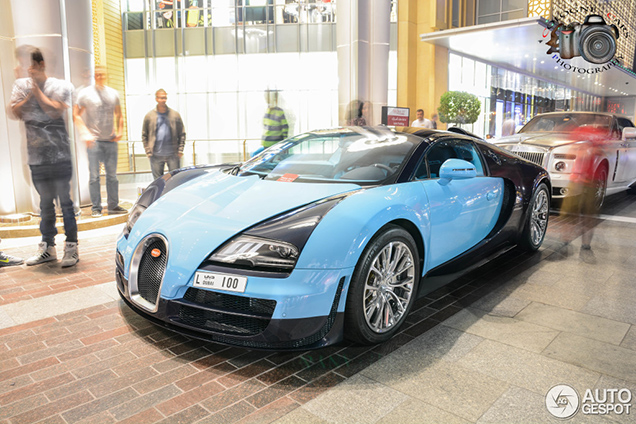 Even more Bugattis are built than mentioned in this article. A lot of customers let Bugatti built their own one-off and several tuners also laid their hands on the Veyron. In the last special we will highlight all the other special editions that are built. The result will be the most complete database of all built Bugattis. Unfortunately we’re still missing a few of these special Bugattis on Autogespot. When you’ve spotted one of the following copies, please don’t hesitate to upload them to Autogespot!