Special: the best made by Porsche at the Nürburgring

There are only a few car manufacturers that are as closely connected with racing as Porsche. Since Ferdinand Porsche founded the company Porsche has always been building race cars for the street. They are the ultimate expression of the love for cars and a thrilling driving experience. This year Porsche added two new models to the history of the brand, the Cayman GT4 and the GT3 RS. Two monsters made for racing. Recently our American friends Elizabeth and Andrew travelled to Stuttgart to pick up two of these machines. Next up was a historical trip for the cars to have a drive on the Nordschleife. We went to the Nürburgring to meet up with the enthusiastic owners and to have a go in both amazing cars.

The internet has changed the world completely over the past years. It has become much easier to communicate with people from all over the world. Thanks to our Instagram page we have become much more known worldwide. This was the way we got in contact with Elizabeth a while ago. Together with Andrew they are known as huge car lovers for especially the brand Porsche. Last year they went to Germany to collect their Porsche 918 Spyder and to have a go on the Nordschleife with the supercar. For them the Nürburgring is the ultimate place to go for a drive. They love driving and find it important that cars are driven. Cars need to be in the wild, on the streets. Next to the 918 Spyder they own a 991 Carrera S, '57 Speedster and a Carrera GT, '73 Carrera RS, 550 Spyder, 997.2 4.0 GT3 RS and more. For them Porsche is one of the best brands in the world. After the pick up they immediately hit the autobahn using the cars where they are made for; pushing them to the limits. 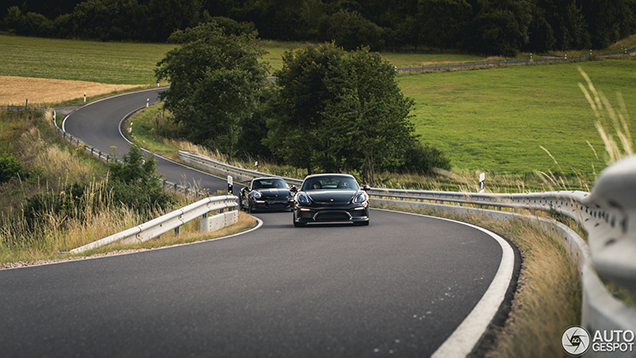 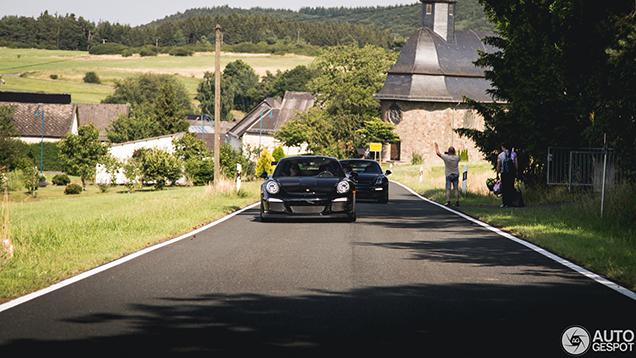 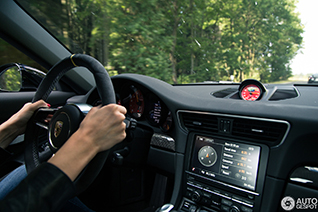 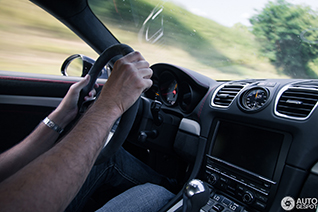 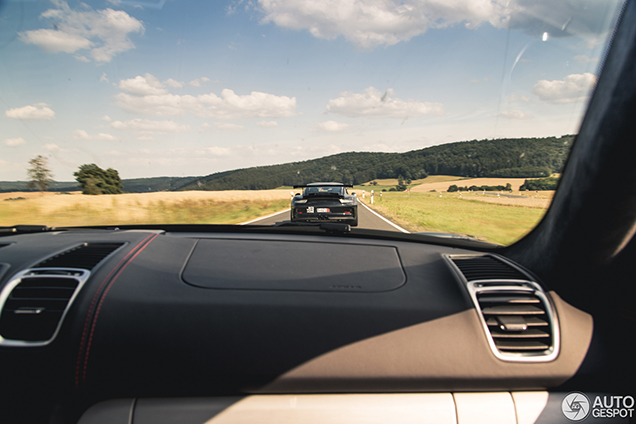 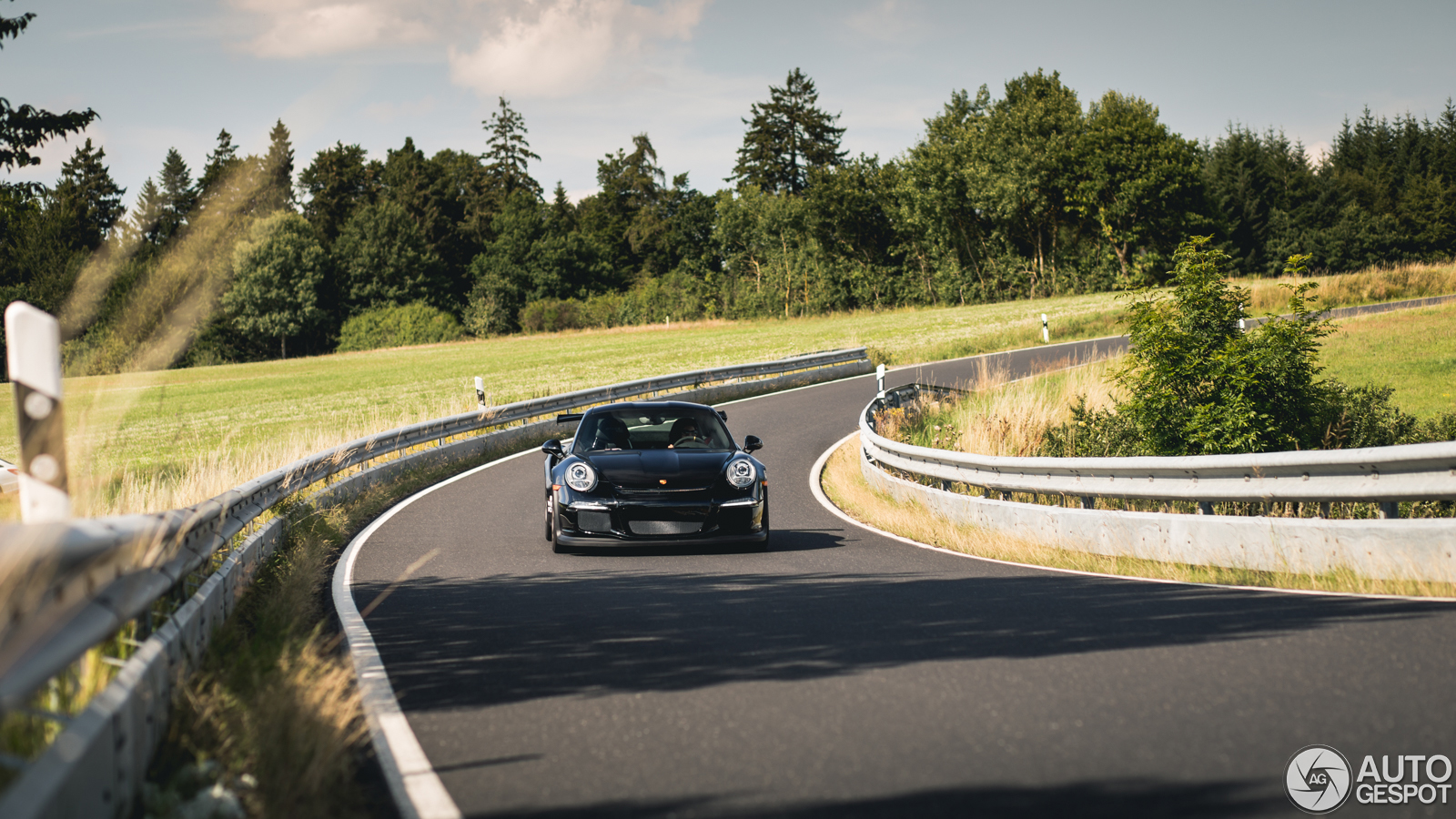 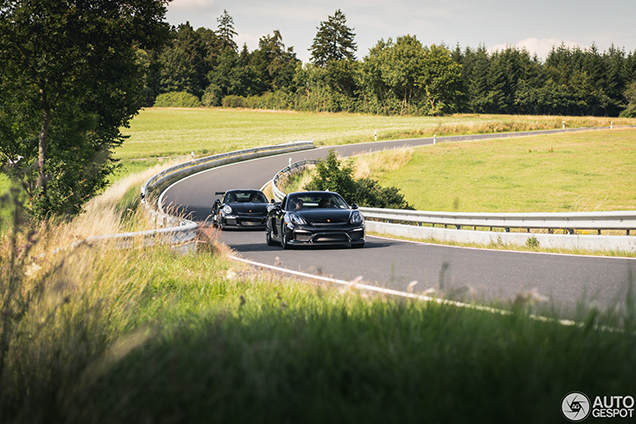 On Saturday we meet up with both at the PistenKlause in the small town Nürburg. As we had some chats before the meeting in Germany talking about driving the cars they directly passed us the keys and said that we should have a go in both cars. For me personally as a big Porsche-fan it was a dream coming true as these cars currently are the most wanted driver cars. After the introduction in Geneva in March of the Cayman GT4 and GT3 RS both cars became hugely popular. Both cars are extremely driver oriented but have their own character. When you take your seat in the Cayman GT4 it is the gear lever which makes you smile. This car is fitted with a manual transmission! While the PDK gearbox is becoming more and more popular Porsche goes back to basics with this car. Inside you find beautiful carbon fiber bucket seats which give you the perfect driving position. A small alcantara steering wheel without any knobs and the big rev counter in front of wants to you keep on driving. When you drive away you have to adapt to the ferm clutch and gear change. But it feels so good comparing to all those cars which are fitted with a flappy-paddle gearbox. You feel reborn, finally changing gears again with a third pedal. There are only a few cars nowadays which come with this set-up. On the twisty roads of Nürburg it feels great to be on the road with this Cayman GT4. It is fast, feels nimble has a great powertrain. The Cayman GT4 feels really special. The car is fitted with the 3.8 litre flatsix out of the 991 Carrera S and underneath the Porsche mechanics but a lot of parts from the Porsche GT3 have been used in this racy car. The Cayman GT4 gives you a feeling you don't get behind the wheel of other cars. It feels as a car you can learn a lot about the basics of the ultimate driving exprience. The car is pure fun, excitement. There is no substitute. This car will become a future classics within a few years. 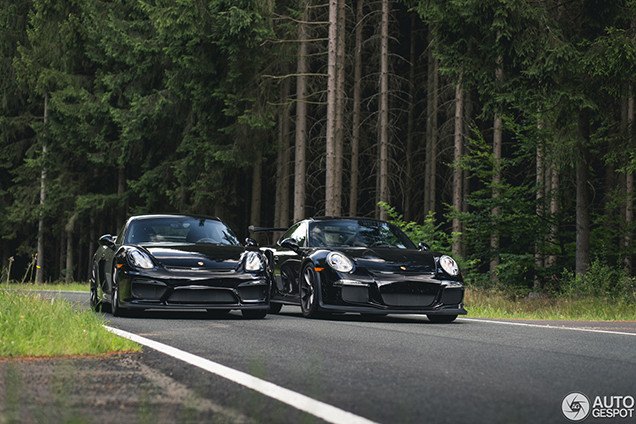 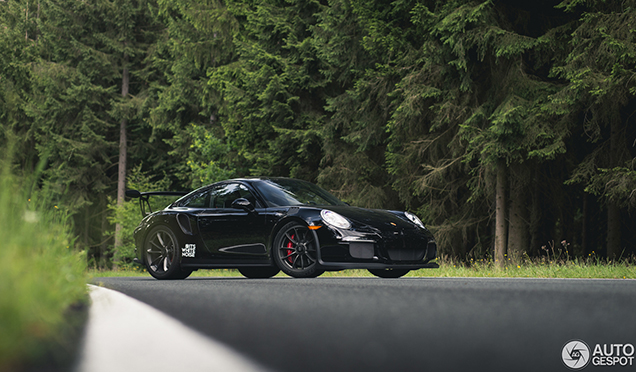 After the drive in the Cayman GT4 it is time to jump in the GT3 RS. This car been specially made for Andrew and Elizabeth. It is a one-off with a high glossy paint job. No other GT3 RS will be made in this paint. With the limited product of the GT3 RS this car is even more unique. Behind the wheel of the GT3 RS it feels different. The car is bigger and feels bigger. The biggest difference is of course the transmission. For the first time in the history of the GT3 RS this car only comes with a PDK-transmission. A small paddle gets the GT3 RS going instead of using your left foot. When you drive the GT3 RS directly after having driven the Cayman GT4 is feels more grown up. Porsche finally chose to drop the magical manual to improve the performance immensely. The four litre flatsix has 500 hp and 460 Newtonmeter of torque. Sprinting to 100 km/h takes just 3,3 seconds which is significantly better than the predecessor. When accelerating the car nevers stops pulling. You can floor the engine to a massive 8,800 revs per minute. The engine just goes and goes untill you change gear and the fun starts again. That is big difference compared to the Cayman GT4 which delivers his 380 hp at 7,400 revs per minute. You feel also that the limit of grip of the GT3 RS is much higher than the Cayman GT4. With cars like this one it becomes almost dangerous how fast you can go on a public road. The GT3 RS is a projectile, a precision weapon to destroy track times. It feels more at home on a track as you can really push it to the limit. Porsche wanted to make groundbreaking performance after the GT3 RS 4.0 and they did. But the fact that they manage to make the car so good will make the predecessors the real masterpiece. With their more traditional set up and the manual gearbox they are the last breath of a unique era of performance cars. A generation where it was all about the thrill and that special feeling you couldn't find in any other car. Who is still looking for that pure driving exprience, can still find it. The Cayman GT4 is the car to have. An amazing toy where driving has an authentic feeling. 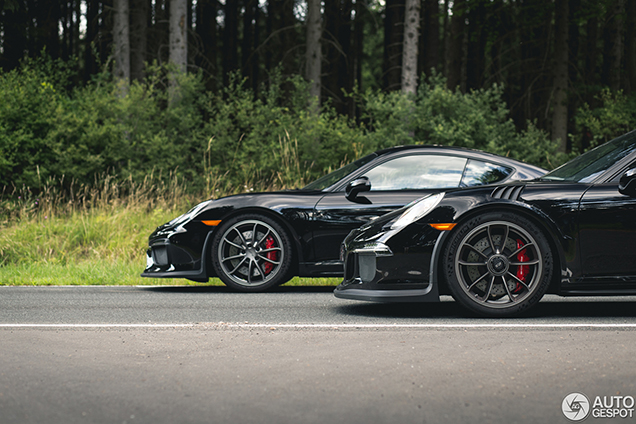 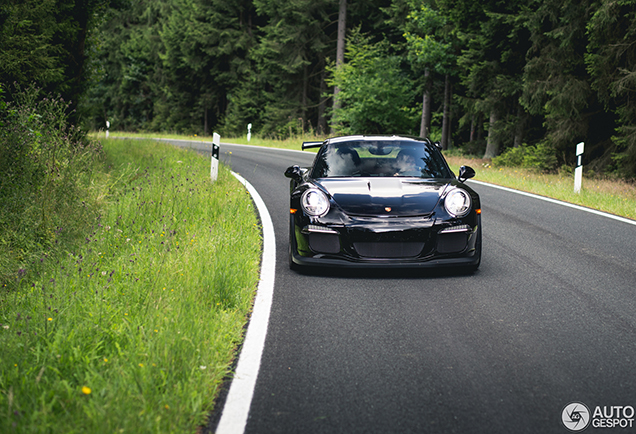 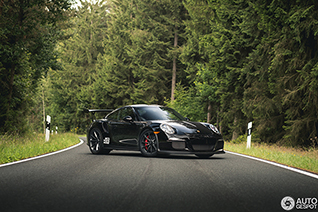 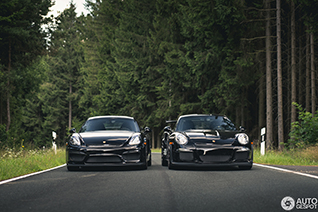 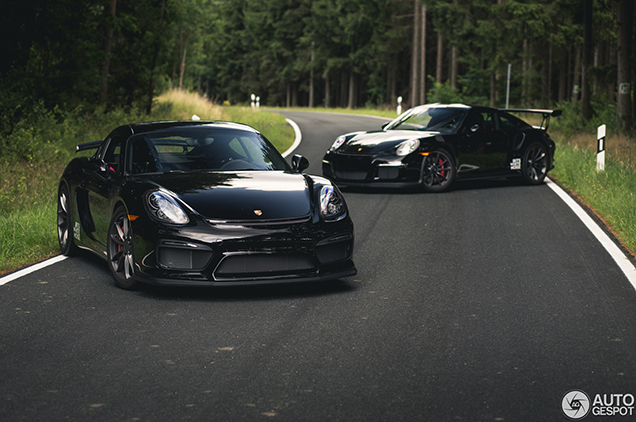 Sunday was racing day on the Nürburgring. Due to racing on Saturday and perfect weather a lot of cars gather at the track to have a go. Only in the morning were we able to do a few laps before the first cars started to crash. Unfortunately we couldn't go for another few laps later during the day as the track was closed and closed again. We decided to go to a small drifting and autocross area not far from the circuit to have some fun and see how the cars behave on the limit. It turns out to be great fun but you really need to push the cars to make a good drift. 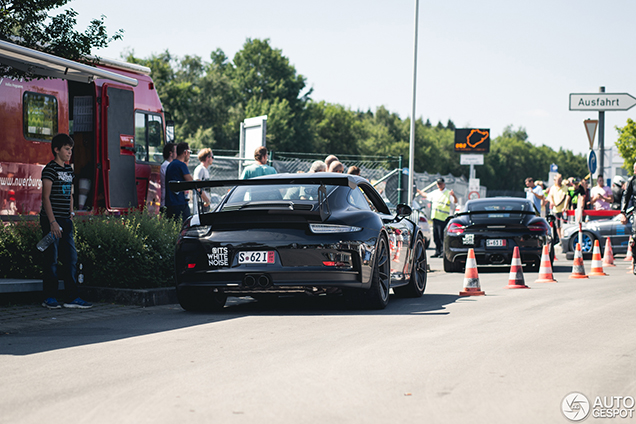 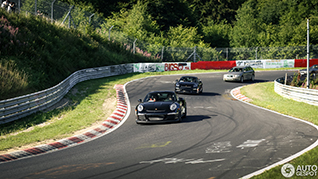 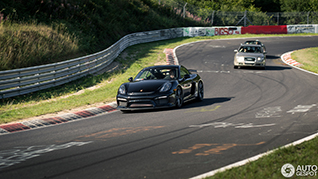 After the adventures in Germany the cars went to the States for Monterey Car Week, Pebble Beach Concours d'Elegance. It was the the perfect place to show these masterpieces. They deserve a special place to be shown to true petrolheads from all over the world. This week the cars will be brought to New York to do what they do best, eat tarmac.

With many thanks to Elizabeth White and Andrew Zalasin for the amazing exprience. 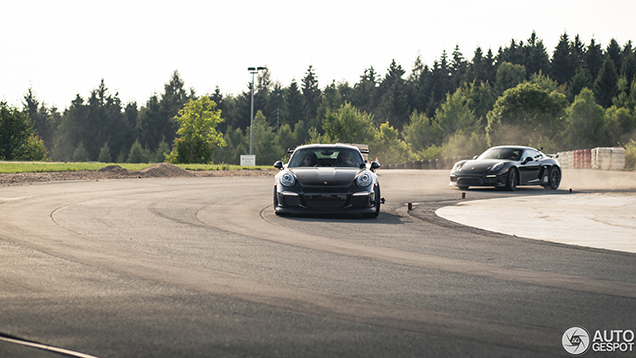 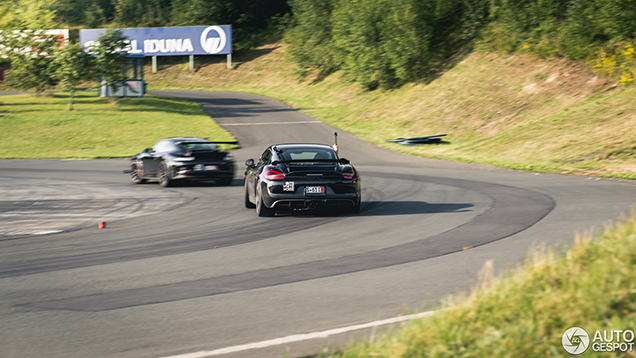 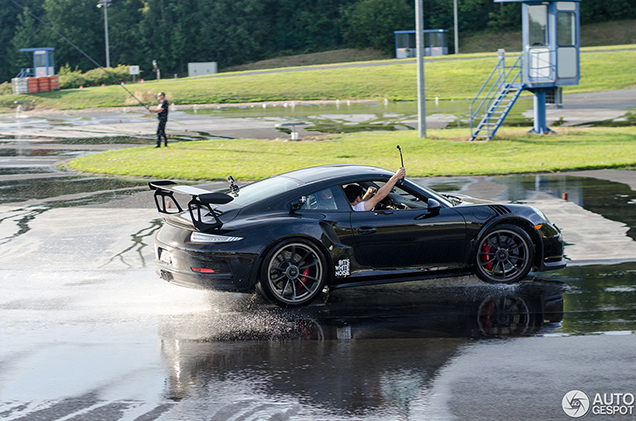 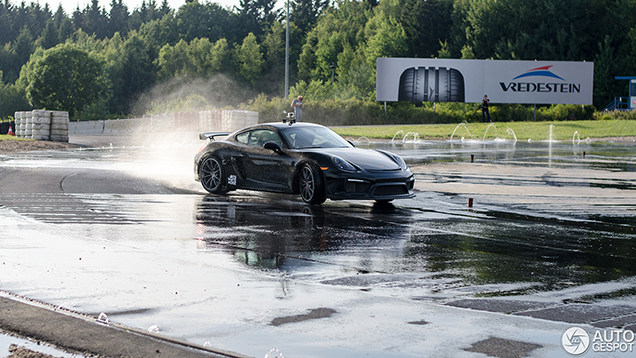