Cruising through Germany at high speed, a visit to Bugatti in Molsheim and a ride through beautiful Switzerland. The first overnight Autogespot Tour which took place last month was definitely one not to forget. With a very divergent group of the fastest and most beautiful sports cars and supercars we traveled through central Europe for some great experiences. We will keep the beautiful memories of this adventure. We want to share them with you in this final travel report.


A lot of cylinders wake up the historical center of Antwerp on a busy Thursday morning. The start of the Autogespot Tour takes place at leading jeweler Colman. In the historic building that was built in 1456, the participants were welcomed with a completely new decorated shop. You can find the best watches and jewels in this shop including Girard, Chopard, Parmigiani, Jaeger-LeCoultre and many more. A small exposition for art can be found in the historic basement that’s been a part of the building since 1400. After a delicious breakfast and a welcome by Colman it’s time to start the Tour. When all 29 cars warm up their cylinders we can’t wait to start the ride. The group has a very divergent amount of cars from an Aston Martin and Bentley to a Ferrari, BMW, Audi and Lamborghini. Almost every brand is present at the Autogespot Alpen Tour. The real beauties of the tour are the Bentley Continental GT3-R and the Lamborghini Murciélago LP670-4 SuperVeloce. 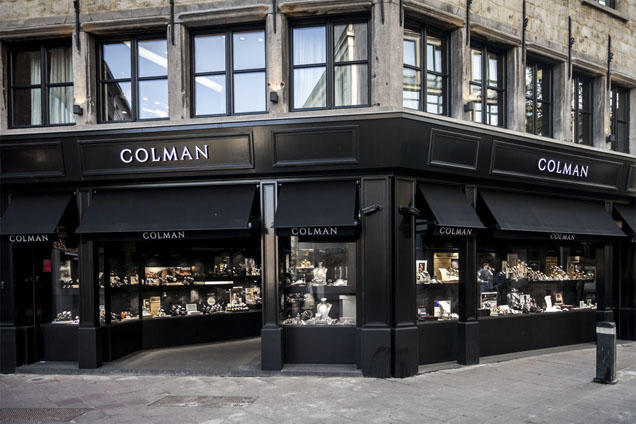 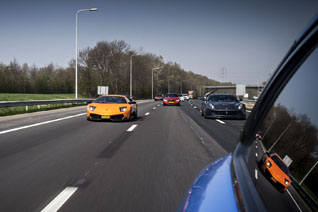 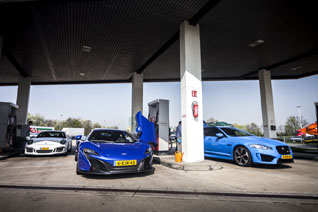 The first day is all about a long drive. From Antwerp to Oberstaufen, almost 800 kilometers. For the owners of the supercars this was a way tougher ride than it was for us in our comfortable car. Our car for these days is a beastlike Jaguar XFR-S Sportbrake which was lent to us by Jaguar. With four passengers and a loaded trunk, Jaguar’s slogan #Itisgoodtobebad proves to be right, this Jaguar is furious! The car looks quite brutal in its blue colour with black components. The car produces 550 hp and has a limited top speed of 300 kph. Later during the tour we will find out whether we can really get to this top speed. A European day of speed control is announced on all highways. In Germany, up to 7.000 agents are working on radar controls on highways and b-roads. It already starts at the ring around Antwerp where a small group is taken off the road for a check. As soon as the busy roads of Antwerp are behind us we floor the pedal to get to Germany. There are several groups driving at their own pace towards our lunch stop, VOS Cars. At VOS Cars a typical German barbecue is waiting where we can take a break after our first stage. A lot of road works and traffic make it impossible to speed to the finish of the day. After about five hours driving towards South of Germany we can finally floor the pedal. With ease the Jaguar manages to reach 300 kph. We pass an Aston Martin V8 Vantage at 270 kph and even a Porsche GT3 (991) has quite a hard time to keep up with the Jag. As soon as we leave the Autobahn we see the Alps in front of us and the sun slowly sets behind the Alps. After a long ride we finish at the Lindner Hotel in Oberstaufen. 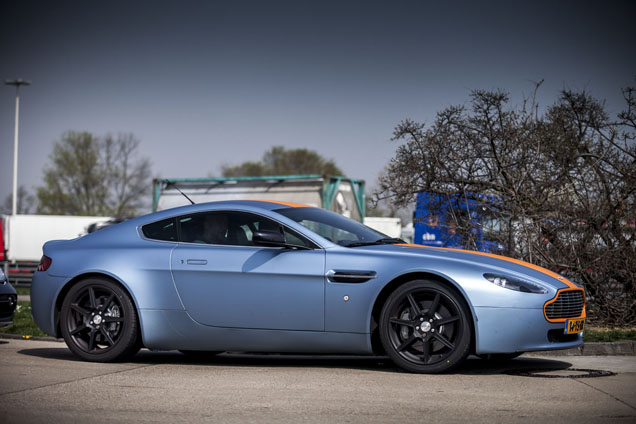 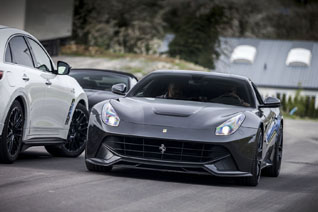 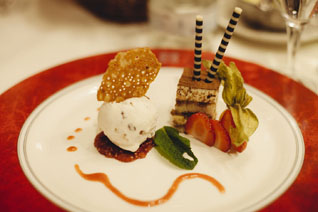 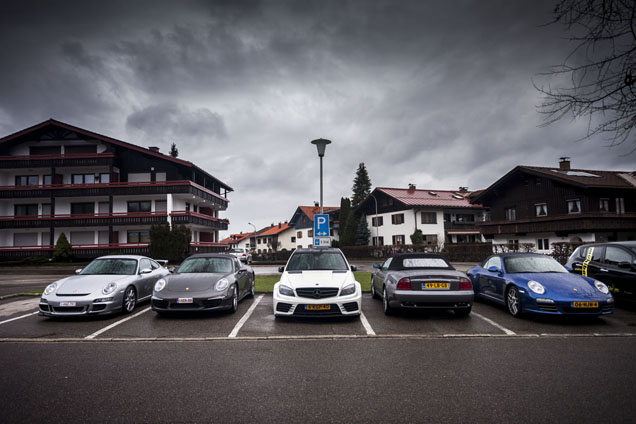 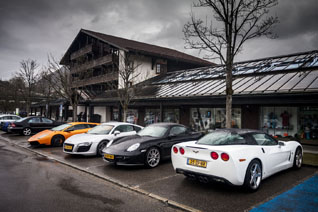 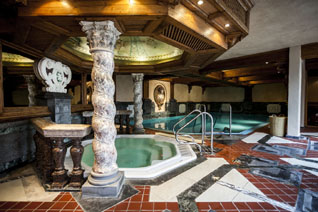 Rain, that’s what starts the second day in Oberstaufen. Unfortunately the weather predictions were right which means that the first kilometers to the Alps are very wet. This day has a route of around 300 kph with a stop in Altdorf. Via St. Gallen we drive to Watwill, a beautiful road that looks very mysterious due to the weather. Especially the lakes look like they’re from a fairy tale. Due to the weather the average speed is way lower but the tunnels that we need to pass make it up. A Corvette C6 with Borla exhaust, a Bentley Continental GT3-R and the Ferrari 458 Spider are the loudest cars that create a lovely symphony. During a big steak at Hotel Reiser in Altdorf, the sun starts to shine and the asphalt is slowly drying up. It’s time to head out! Via Altdorf we drive towards the North to make it to the Brienzersee via the Sarnersee. We’re driving together with the Ferrari FF, 458 Spider and the Mercedes-Benz C 63 AMG. A soft sun shows up and confidence is building which results in a small drift every now and then. The roads in Switzerland are just beautiful but with a wet surface a small mistake can have really big effects. The last hour of the day we can finally floor the pedal. Together with the Ferrari 458 Spider we’re driving towards Interlaken where we finish this day. The cars get a prominent space in front of the hotel and the entire evening the cars draw a lot of attention of everyone passing by. 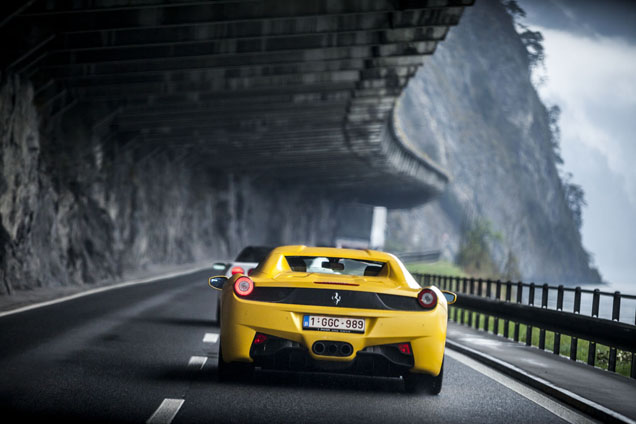 Saturday is all about our visit to Bugatti. Everybody woke up early and we arrived at Bugatti around noon. When we leave Switzerland we meet a BMW M3 Coupé who’s up for a fight with one of our cars but with the incredibly high fines in Switzerland there’s not much of a fight. When we arrive at Bugatti we enter the terrain all together and we even surprise the men from Bugatti with our special selection of cars. The diversity of the group is enormous. From the Lamborghini Murciélago LP670-4 and a Ferrari FF to a tuned Mercedes-Benz C 63 AMG and an Infiniti FX45 Vettel Edition. It’s great to drive around with such a diversity of cars. 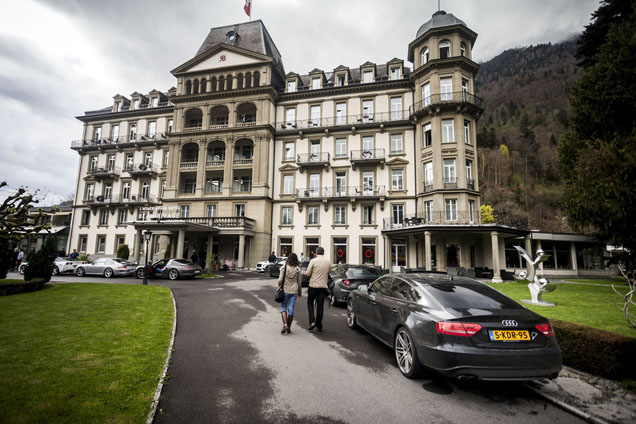 The Bugatti family originates from Milan but later they moved to Molsheim. Family Bugatti made their name in art and that was Ettore Bugatti’s goal. Instead he became engineer and was aiming for building the most prestigious and luxurious sports cars in the world. During our visit a historical Grand Prix car from 1926, a T51, was shown outside. This was a way more expensive Bugatti than the Veyron Grand Sport Vitesse that set the record of a top speed over 400 kph.

Most of us know Bugatti since the introduction of the Veyron 16.4. Meanwhile this model isn’t produced anymore but we do know that Bugatti will get a new chapter with the introduction of the Veyron’s successor. Since the founding of Bugatti they built up to 8.000 of which 450 copies of the Veyron. In 1998, Bugatti was reborn when Ferdinand K. Piëch decided to sell the name Bugatti. The goal was clear, bringing Bugatti back to the top. This costed a lot of money and resulted in the Veyron. The development of the Veyron had no limits. The estate was reinstated especially for the 1.001 hp strong supercar and a hyper modern factory was built. Out of ten customers that visit Bugatti, up to six of them arrive with their private jet. This says enough about the wealth of most of Bugatti’s customers. After our visit to Bugatt ia lunch at Hotel Diana in the center of Molsheim followed. A lot of customers visit this hotel for a lunch after signing their purchase contract at Bugatti. 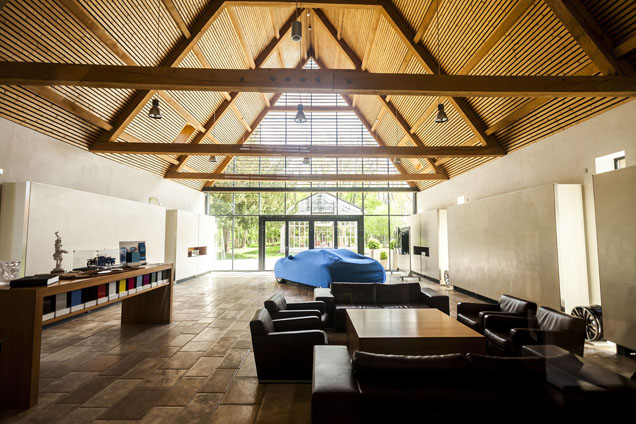 From Molsheim, the next task was very simple. Those who’re the first in Luxemburg can still get to the terrace to finish the tour with a drink. With a group we’re driving a beautiful detour to the highway. Eventually we end up with the Ferrari FF, Porsche Cayman, Porsche GT3, Audi R8 and Lamborghini Murciélago LP670-4. It’s quiet on the French roads and this results in some short sprints on the highway. When we arrive in Luxemburg we wake up the entire city center with our cars. We play a symphony of six-, eight- and even twelve-cylinders in the streets of Luxemburg. Especially the R8 and the Lamborghini are very loud. During our dinner people keep on talking about our spectacular entrance in Luxemburg and the visit at the historical estate of Bugatti. 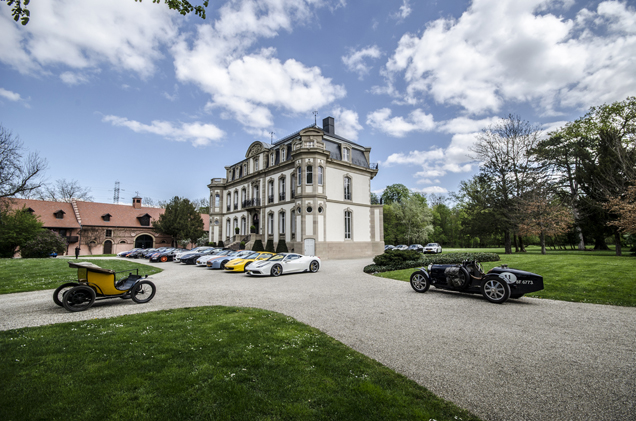 Sunday morning has a great start with a sun shining through our curtains. Officially the tour is over but we decided to head to the Nürburgring with a small group. On our way the Autobahn is finally empty and we can floor the pedal of all ten cars during our trip to the Green Hell.

We manage to pass the magical limit of 300 kph in our Jaguar and our top speed is a 300,7 kph which shows the incredible potency of this Jaguar. Finally the owner of the 991 GT3 manages to reach 300 kph, he didn’t manage to do this in the days before because of the busy roads. It’s great to see the amazing handling of the GT3 at high speeds. The Jaguar might weigh more than the GT3, we can still keep up with this Porsche. At the Nürburgring we arrive at a special day for bikers which means that we can’t drive the track ourselves. We decide to grab a schnitzel and continue our drive home.

Smiling people and a lot of gasoline later the last cars arrive back in the Netherlands. After 2.000 kilometers through Belgium, Germany, Liechtenstein, Switzerland and France we’re back home. A lot of enthusiastic reactions will result in a new Autogespot Tour in September! When you’re interested you can contact us via crew@autogespot.com

Special thanks to our partners of the Autogespot Alpen Tour:
Colman Antwerpen
VOS Cars