At last, soon enough we will be able to witness the reveal of the McLaren 688 HS. It’s very likely that this is going to happen over the coming days at the Pebble Beach Concours d’Elegance. We have showed you the first pictures of the 688 or MSO HS at the end of May, when McLaren still tried to deny that this car was in the making. Well, it’s safe to say the denying is over, thanks to these leaked shots!

The McLaren MSO HS will be produced in a limited series of 25 cars, of which the first ones have already been delivered to their respective owners. The MSO HS is essentially an upgraded 675 LT. First of all, McLaren tweaked the engine a little bit: it now produces 688 hp. At the front we can see sideblades on the front bumper and louvres in the wheelarches to generate a better airflow which ultimately leads to more downforce and better lap times. It also looks very cool, a bit like the infamous P1 GTR! However, the most extensive changes happen to sit at the back of the car. McLaren fitted an active rear spoiler which -just like the one found on the P1- changes its stance depending on how fast you’re going. Furthermore, McLaren managed to shed a little bit of weight from the 675 LT; the MSO HS is around 40 to 50 kilograms lighter.

All these changes have one similar goal: performance. The McLaren MSO HS is a thoroughbred trackday weapon, even more so than the 675 LT, which was already a beast at the track. Hence, the McLaren Track Telemetry system is fitted as standard on the MSO HS. This system comes with three camera’s: one in the nose, one behind the shoulder of the driver and one at the back. With the footage of these three camera’s, and an internal computer which measures things like your speed and the amount of g-force you’re pulling, you are able to analyse how you did on the track. This is really fun, and it enables you to become a better driver! What’s not to like about this car? We can’t wait to hear and see more. 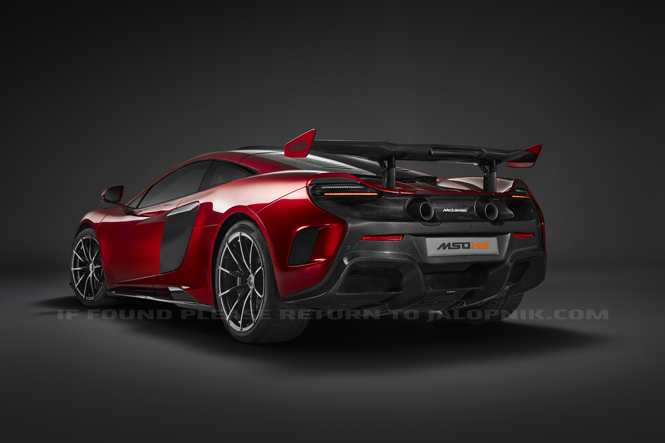