The 296 GTB, the latest evolution of Maranello’s mid-rear-engined two-seater berlinetta, was premiered today during an online event broadcast on Ferrari’s social media and web channels. The 296 GTB redefines the whole concept of fun behind the wheel, guaranteeing pure emotions not just when pushing the car to its limits, but also in day-to-day driving situations.

The 296 GTB ushers in an authentic revolution for Ferrari as it introduces a new engine type to flank the marque’s multi-award-winning 8- and 12-cylinder power units: a new 663 cv 120° V6 coupled with an electric motor capable of delivering a further 122 kW (167 cv). This is the first 6-cylinder engine installed on a road car sporting the Prancing Horse badge; it unleashes its massive 830 cv total power output to deliver previously unthinkable performance levels and an innovative, exhilarating and unique soundtrack.

The car’s name, which combines its total displacement (2992 l) and number of cylinders was chosen, with the addition of the GTB (Gran Turismo Berlinetta) acronym in finest Ferrari tradition, to underscore this new engine’s epoch-changing importance to Maranello. It is not simply the living, beating heart of the 296 GTB, but it also ushers in a new V6 era that has its roots deep in Ferrari’s unparalleled 70-year-plus experience in motor sports.

The 296 GTB’s plug-in hybrid (PHEV) system guarantees it is an incredibly usable car as well as cutting pedal response times to zero and delivering a 25km range in all-electric eDrive mode. The car’s compact dimensions and the introduction of innovative dynamic control systems as well as meticulously honed aero ensure that the driver will instantly experience its astonishing agility and responsiveness to commands. Its sporty, sinuous design and extremely compact dimensions also visually underscore its exceptional modernity, brilliantly referencing the likes of the 1963 250 LM, the perfect marriage of simplicity and functionality.

As was the case with the SF90 Stradale, for clients who want to exploit the car’s extreme power and performance to the utmost, particularly on the track, the 296 GTB is also available with the Assetto Fiorano package, which includes lightweight features and aero modifications.

The 296 GTB is the first Ferrari road car to sport a V6 turbo with a vee with an angle of 120° between the cylinder banks, coupled with a plug-in electric motor. This new V6 has been designed and engineered from a clean sheet by Ferrari’s engineers specifically for this installation and is the first Ferrari to feature the turbos installed inside the vee. Aside from bringing significant advantages in terms of packaging, lowering the centre of gravity and reducing engine mass, this particular architecture helps deliver extremely high levels of power. The result is that the new Ferrari V6 has set a new specific power output record for a production car of 221 cv/l.

As the V6 turbo is integrated with an electric motor at the rear, the 296 GTB’s combined maximum power output is 830 cv, putting it at the top of the rear-wheel-drive sports car segment as well as making it extremely flexible. This is true both in terms of day-to-day contexts (the 296 GTB has a full-electric mode range of 25 km), and in driving enjoyment (accelerator pedal response is instant and smooth at all engine speeds).

The powertrain assembly comprises a V6 turbo ICE, with the 8-speed DCT and E-Diff, and the MGU-K located between the engine and the gearbox. A clutch is set between the ICE and the electric motor to decouple them in electric-only eDrive mode. Lastly there is a high-voltage battery and the inverter which controls the electric motors.

EXTERIOR
The Ferrari 296 GTB’s design is the result of the desire of the Ferrari Styling Centre to redefine the identity of the mid-rear-engined two-seater berlinetta by giving it an extremely compact line with an original, modern look. Thanks to its short wheelbase and its monolithic, sculpted structure, the 296 GTB is indeed the most compact berlinetta to emerge from Maranello in the last decade. The typical berlinetta fastback configuration has been abandoned in favour of creating a cabin architecture that visually seems set into an imposing volume – the combined effect of the short wheelbase and the composition of elements, such as very muscular wings, the visor-style windscreen, robust flying buttresses and a new vertical rear screen. These forms produce a highly original cabin silhouette that dominates the overall perception of the car. 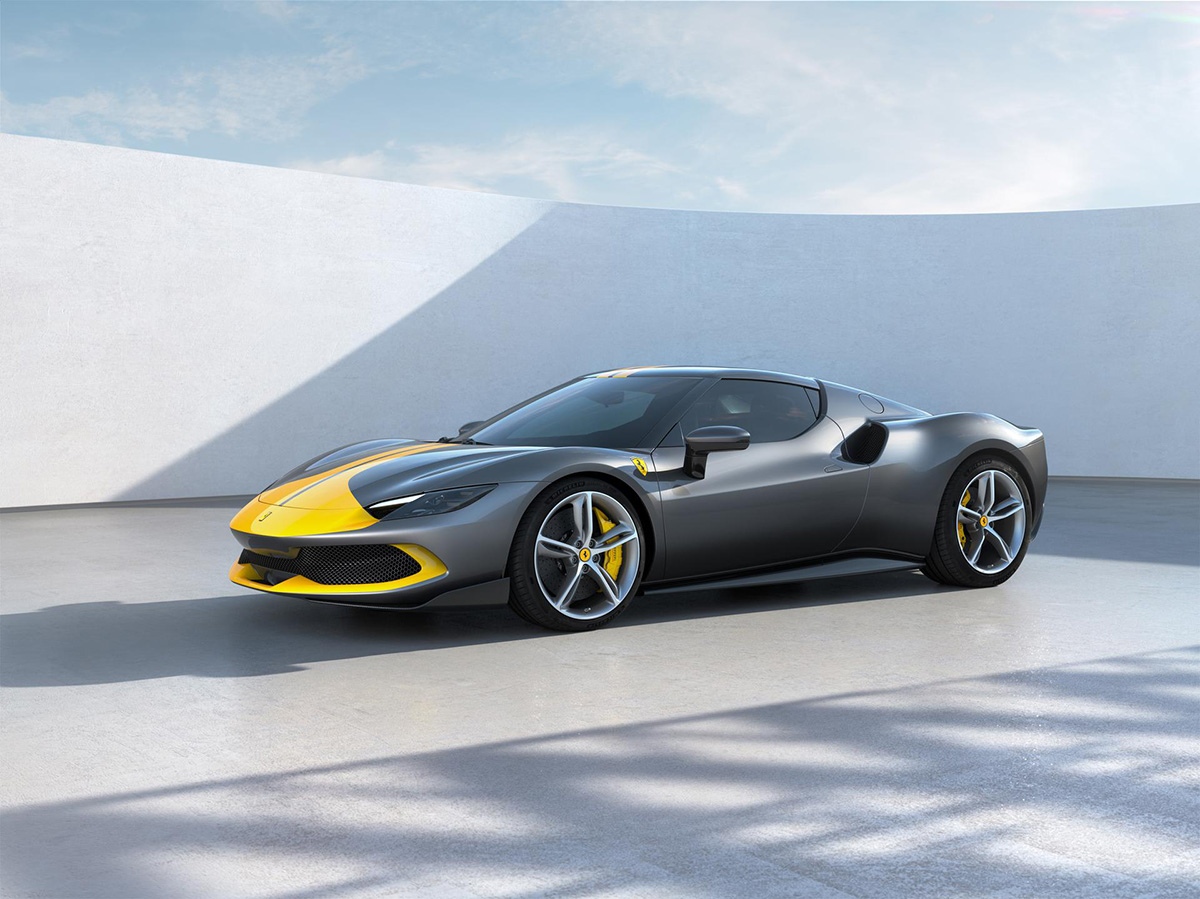 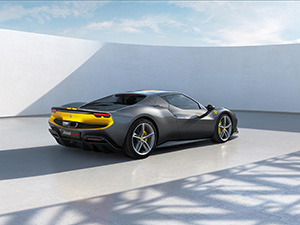 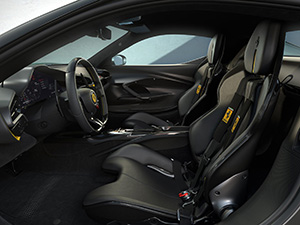 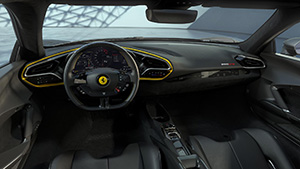 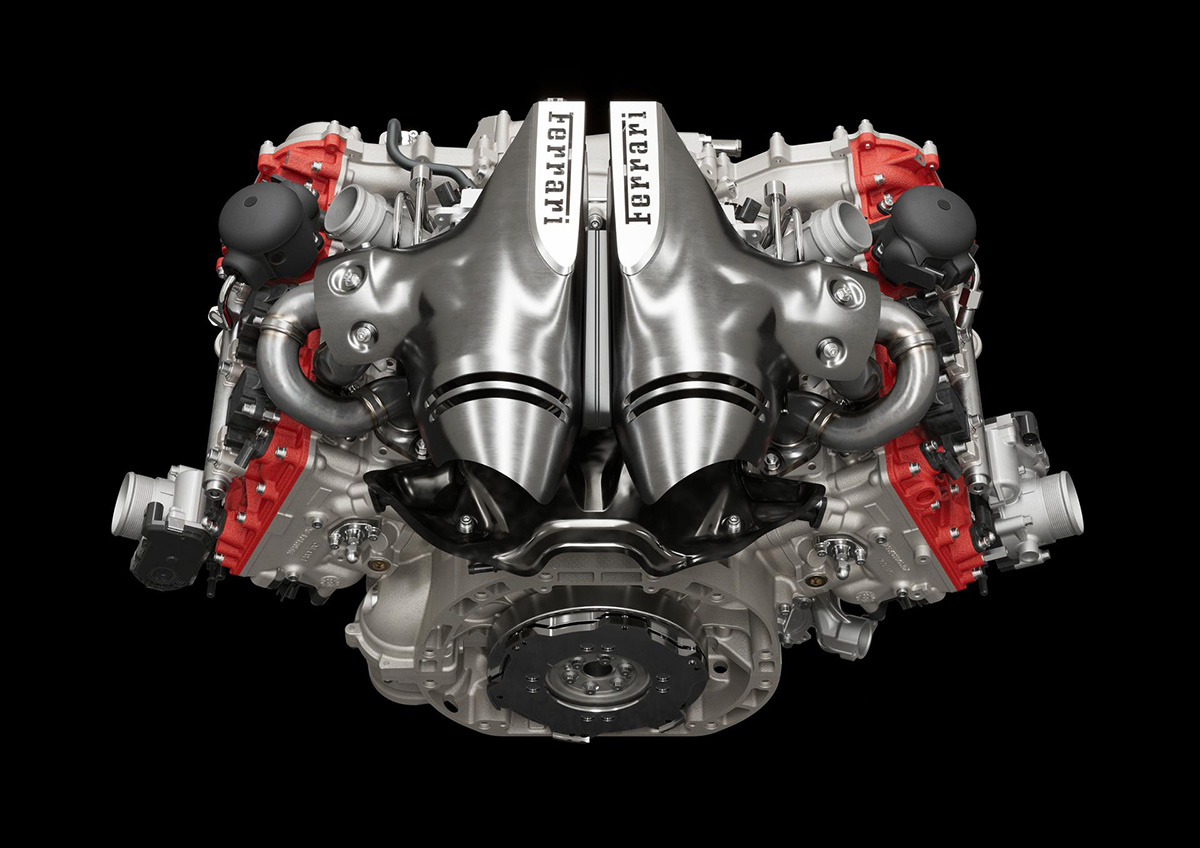