Ferrari LaFerrari Spider: is this it?

The LaFerrari Spider is a car many hypercar-lovers look extremely forward to. It's an absolute certainty that it's coming: some Ferrari-collectors already received their box with the symbolic keys to their LaFerrari Spider. What's curious though is that the car hasn't been spotted until this day, could this one finally be it?

The LaFerrari Spider is going to be an even more exclusive and expensive car than the LaFerrari already was. Hardly anything has been officially announced yet, but there have been some rumours that less than 100 cars will be made and that it will cost more than 3 million euro's at sticker. Yet still, I wouldn't deny the box when I was in the lucky position to be offered one. It's very likely that the LaFerrari Spider will already be worth two times the price that Ferrari asked for it within a day the first car gets delivered, certainly when you see the LaFerrari is being sold at no less then 4 million euro's right now. Under the bonnet the LaFerrari Spider will not differ very much from it's fixed-roof brother. Of course, removing the roof does affect the weight and the aerodynamics of the car in a negative way, but this will have a virtually unnoticeable impact on the performance figures. 0-100 km/h should still be possible in under 3 seconds and the top speed will be something around the 330 km/h-mark.

Alright, the stats and information I stated above will be confirmed by Ferrari when they unveil the LaFerrari Spider, that should be somewhere in early 2017. Let's take a closer look at the pictures we have here right now, because do we really see a LaFerrari Spider here? First of all I think it's safe to say there is a LaFerrari on the trailer, whether it is a Spider or not. What's so curious about these pictures is the strange construction around the roof. It looks very suspicious, almost if the guys who transport it have something to hide. Maybe it's the different roofline from the Spider? What do you think?

Thanks for the heads up and the pictures Rico & Mees! 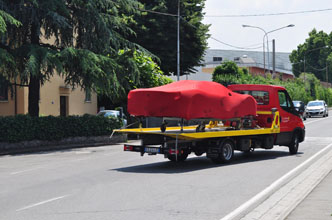 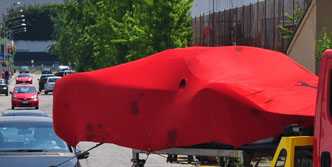