Unmatched, incredible or out of this world. It are all superlatives with which we can start our story. A few days with the Rolls-Royce Wraith almost made everything else look uncomfortable. The most dynamic and sporty Rolls-Royce ever had to prove itself during this weekend in the beautiful landscape of Italy and particularly the surroundings of Lake Como.


On a drizzling Friday morning we start our trip to Lake Como in Munich. This weekend we won’t only focus on the Rolls-Royce Wraith but also on the many classics that will gather at Villa d’Este. The Concours d’Elegance might be one of the most famous concours in the world where the most expensive cars show up. We already published another report about the atmosphere at Villa d’Este and when we’re approaching Villa d’Este it’s clear that the Wraith isn’t an inconspicuous car. Its stately appearance makes sure that we can enter the estate of Villa d’Este without any problems. We can park next to the other invited customers by Rolls-Royce. This might be the most exclusive event in the world and it gets way more accessible with just driving the right car. Of course we pick up our accreditation after parking our car to make sure that we’re not doing anything illegal.

The previous alinea perfectly describes what Rolls-Royce is known for. The stately looks of their cars opens doors that normally won’t open this easy. Even on the highway people will get out of your way and let you pass way more easy than normally. The Wraith is a unique appearance and even in the quite boring composition of this demo model you can’t deny it. With boring we mean the fact that Rolls-Royce offers limitless possibilities with their Bespoke department and that we’re all missing this on this model. Think about the dozens of models that Rolls-Royce showed us in the past few years, like the recently introduced Limelight Edition or the Movie Collection. Even a two-tone colour composition is missing on this demo model. What to think of a beautiful hood of brushed aluminum in combination with the black paint. It would have made this demo model look way better. 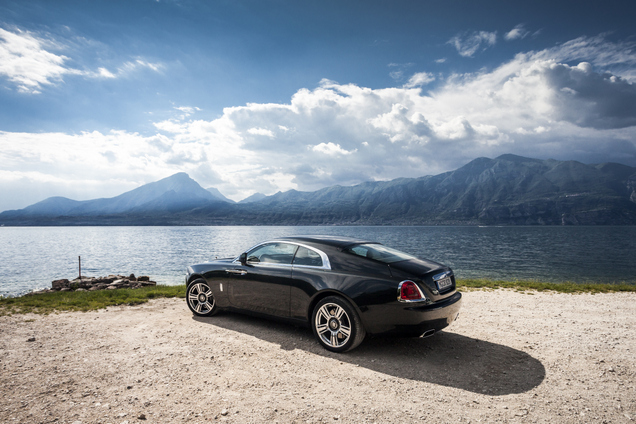 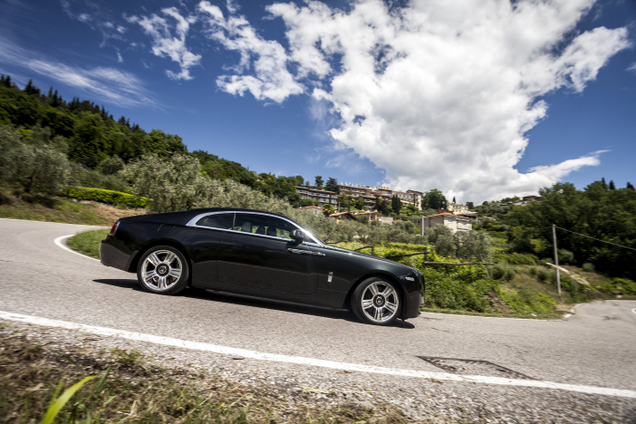 Unfortunately we have to keep on dreaming because the Wraith we’re driving is black and that’s it. It almost sounds like it’s a bad thing but as soon as we got into the car we have forgotten about the colour. The carpet feels very soft and the Power Reserve, Rolls-Royce’s way a tachometer will never tell you that you’ve got no power left. The meter will always show a reserve of almost 40 percent, even when you floor the pedal at a speed of 250 kph. We found out that this top speed is limited because on a beautiful part of the Autobahn towards the Brenner pass there’s not much traffic and we can easily reach the top speed. It immediately shows us how sporty the Rolls-Royce is. 632 hp and 800 Nm of torque are trying to keep the 2.440 kilograms heavy Rolls-Royce rolling!

The V12 has more than enough power and this results in a sprint to 100 kph in 4.6 seconds. An ingenious system aboard of the Wraith presets your gears for a corner. Via the GPS system, the car adjusts to the upcoming corner with choosing the best gear. Rolls-Royce invented this system to drive sporty as well as comfortable. The Wraith might be the most sporty and dynamic Rolls-Royce ever and the car drives really great but the suspension doesn’t give you that sporty feeling. The car is focused on comfortable driving with a sporty flavor. That flavor is definitely present but more in the shape of direct steering than a stiff suspension. If you’re looking for that we suggest that you order a Bentley Continental GT although this does mean that you won’t have that much leg room in the back. The Wraith definitely has a lot of leg room in the back. We are traveling with full equipment and four persons without any problems. The trunk is so big that you can easily fit in a few suitcases. That isn’t that strange because the Wraith is based on the platform of the BMW 7 Series and that car is known for the enormous amount of space. There’s a lot of leg room in the back but it’s a bit harder to get into the back because the front seats have to be folded forward.

Behind the steering wheel of the Wraith it immediately stands out that we’re dealing with a BMW cockpit and interface. The gear lever as well as the multimedia system and the buttons for all the other systems are almost identical. It makes us feel home immediately. The much discussed I-Drive system, which is perfected in the last few years, is very easy to handle. Something that is quite hard in a Maybach or other Mercedes every now and then. Knowing that the technology is based on BMW gives us a good feeling. It was just a matter of redeveloping this technology for Rolls-Royce. They haven’t missed the smallest detail, even the head up display has now Rolls-Royce logos. 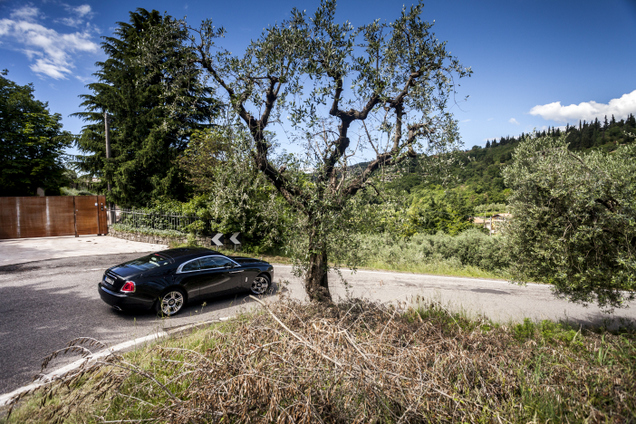 The Rolls-Royce Wraith is a car we don’t see as much on the streets as we would like to. Only the real millionaires will afford this Rolls-royce. There’s a saying: “When you have to ask for the price you can’t afford it”. We can tell you that the cheapest Wraith is available at 360.00 euros and this doesn’t take you along the Bespoke department. A bright and outstanding colour is needed on a car like the Wraith and that will cost you a lot more money. Rolls-Royce is more and more aiming for the new money in the Middle East, Russia and Asia. Markets that keep on growing and have a big market share for Rolls-Royce. The Wraith and the upcoming SUV will only help Rolls-Royce increasing this market share.