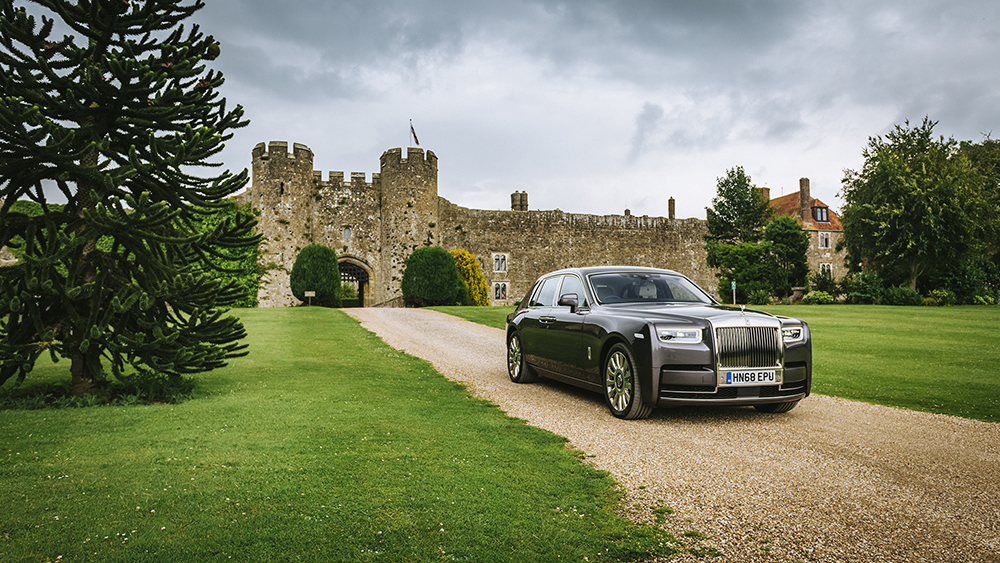 Guided by the Spirit of Ecstasy on the hood we leave the Rolls-Royce estate in Goodwood. The factory of this unique brand lays hidden behind the hills of the Goodwood estate, which is still under care of Lord March. On these grounds many liters of gasoline have been, and will be burnt during the various festivals and events. We arrived a few weeks before the legendary Festival of Speed and the entire property already has the special vibe. We get to take out the Rolls-Royce Phantom VIII, a land yacht as Rolls-Royce likes to call it.

It cannot get more luxurious than this. Before heading out in the brand new Rolls-Royce Phantom we get to take a look in the factory. Unfortunately it is strictly forbidden to take pictures inside. The worlds elite do not want to have their car(s) appear on the internet before they have seen them themselves. A sentiment we can totally understand, although it may be a bit of an overstatement to say all cars are even picture worthy. A yellow interior, or even completely purple, as long as you can pay the bill anything is possible! The best example of this is probably the highly controversial Rolls Royce Dawn owned by Michael Fux, the (self proclaimed) "spec-god" of Rolls Royces. The particular spec is based on the orchids found in the gardens of the "Quail Lodge" by Pebble Beach. To make the color truly life-like flowers were picked from the garden and sent to Goodwood as a color sample. 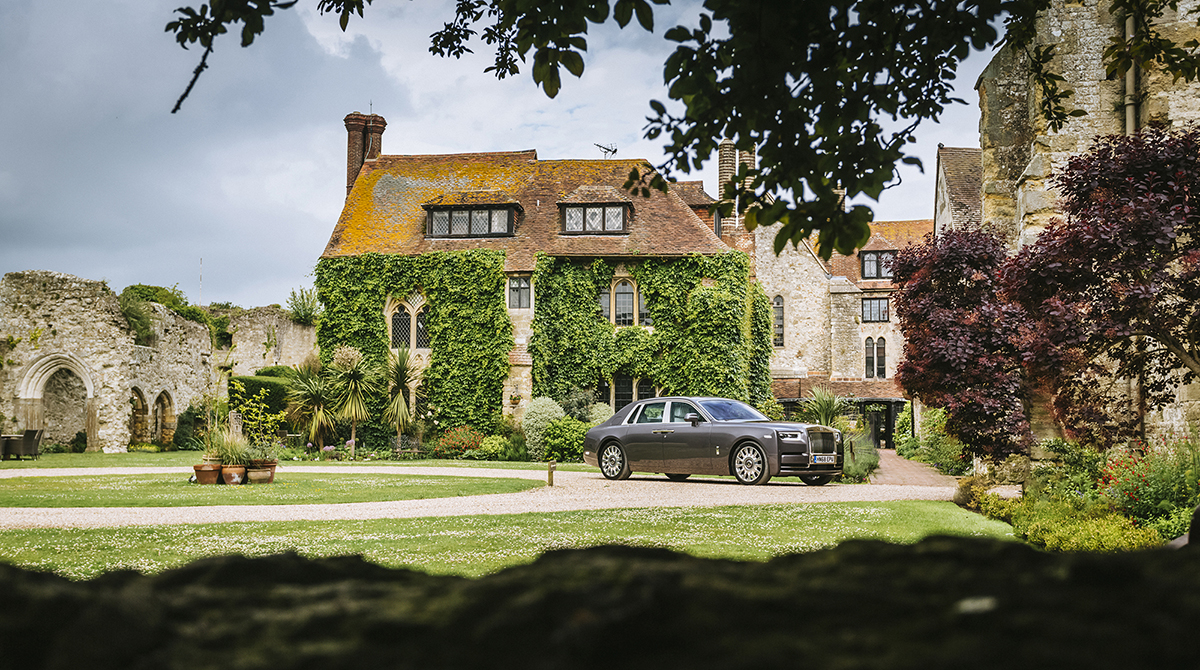 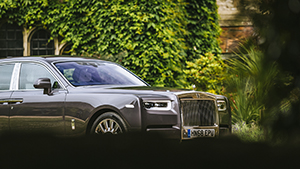 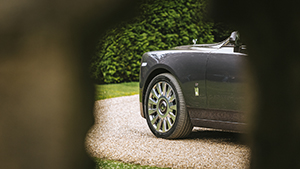 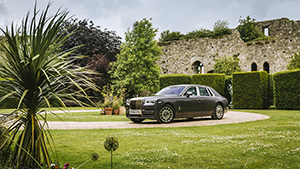 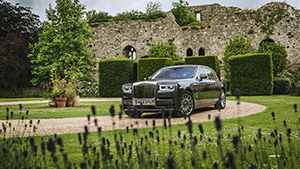 At Rolls Royce, the sky is truly the limit. This is shown when we tour the factory and hear about a very wealthy Sumo wrestler who wanted a Rolls Royce. A normal rear seat was not at all what he wanted. He requested one giant chair so the athlete could watch his movies in the car. This resulted in a Phantom equipped with a giant hard drive sporting enough storage capabilities for hundreds of movies. Naturally the wrestler wanted to be able to watch DVD's as well, so Rolls Royce engineered a special cabinet to store and play DVD's. Everything is possible, even one-off cars such as the Rolls-Royce Sweptail, which was only the beginning according to Rolls Royce. After the Sweptail was announced Rolls Royce received numerous special commission requests. 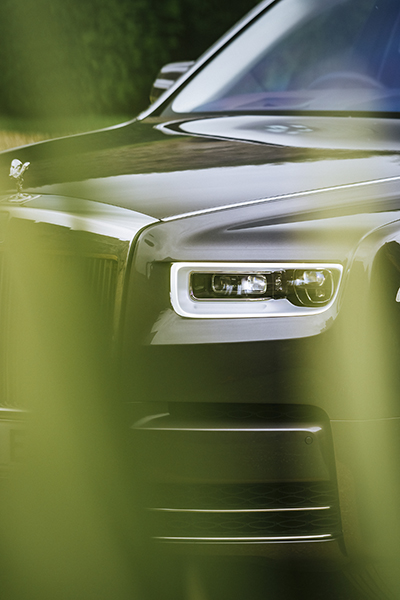 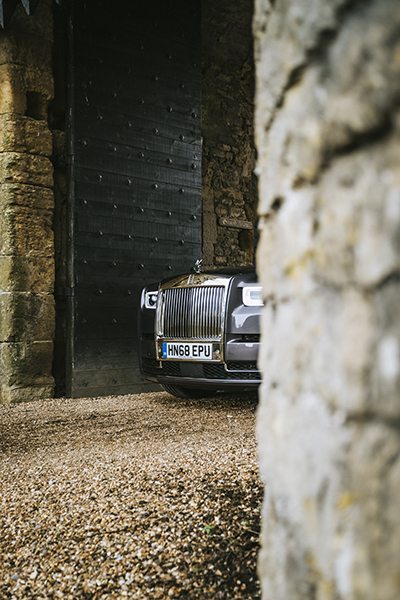 When leaving the factory grounds it becomes clear Rolls-Royce's class extends further than its cars. The driveway is as perfect as the cars they build. The trees are in perfect shape and it is obvious you are dealing with the most luxurious car manufacturer in the world. It is worth a look on Google Maps. Unfortunately the pictures were taken during a dry period, resulting in a roof that is not as green as it otherwise would have been. But, let's get back to business. It is time to experience luxury like we have never seen before. 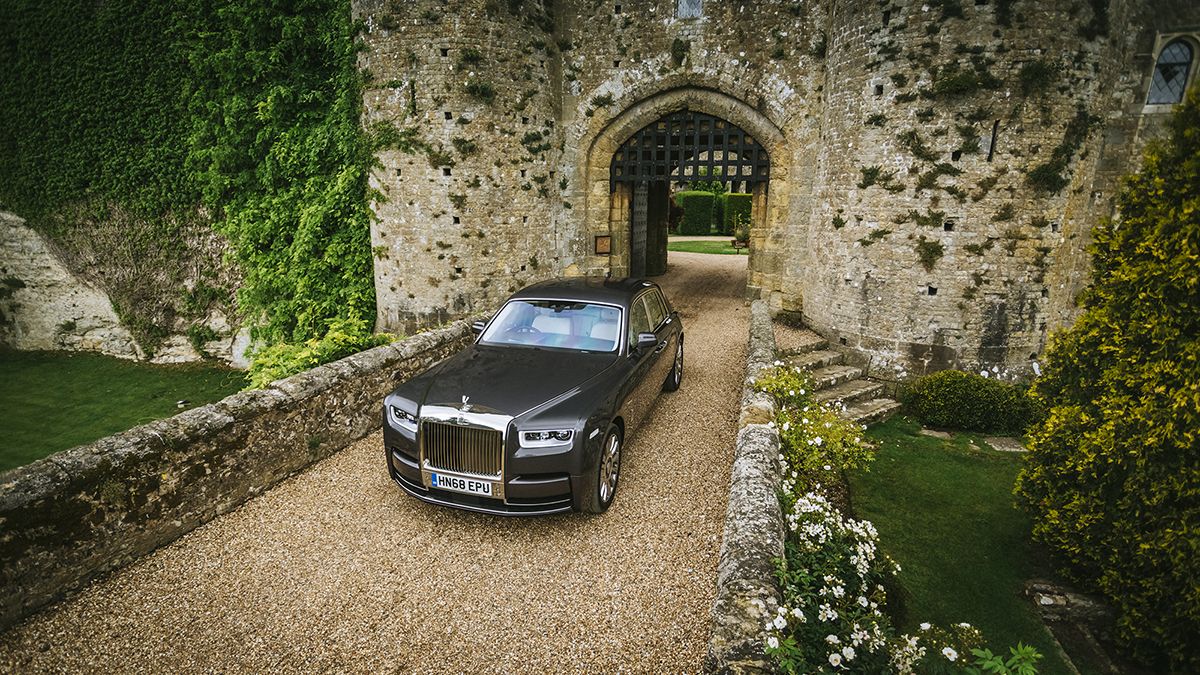 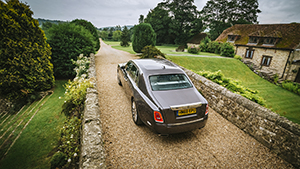 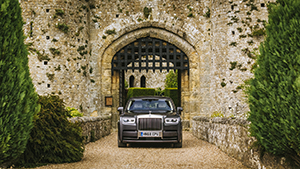 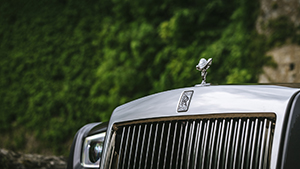 The experience starts with a right hand drive steering wheel. This takes some getting used to, especially considering the car is 5.7 meters long and over 2 meters wide. People who have driven in the United Kingdom know the asphalt is not always as accommodating to wide cars as in other places around the world. Let's be clear, we managed to return the car without any damage but this was quite a challenge at times, especially in the little villages the country is known for. Fortunately the lady on the front of the car is always visible and helps to see how the front of the car extends itself. This does not take away from the fact that this car is harder to manoeuvre than others. Combine this with a (much) higher price tag and you have a combination that will make you want to measure twice, if not thrice before cutting once! 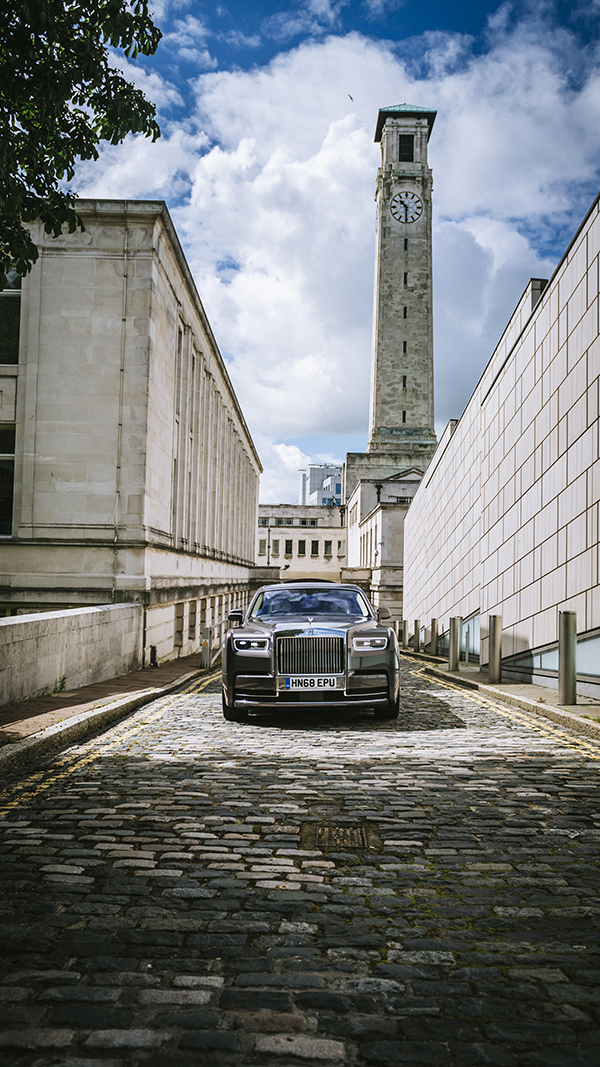 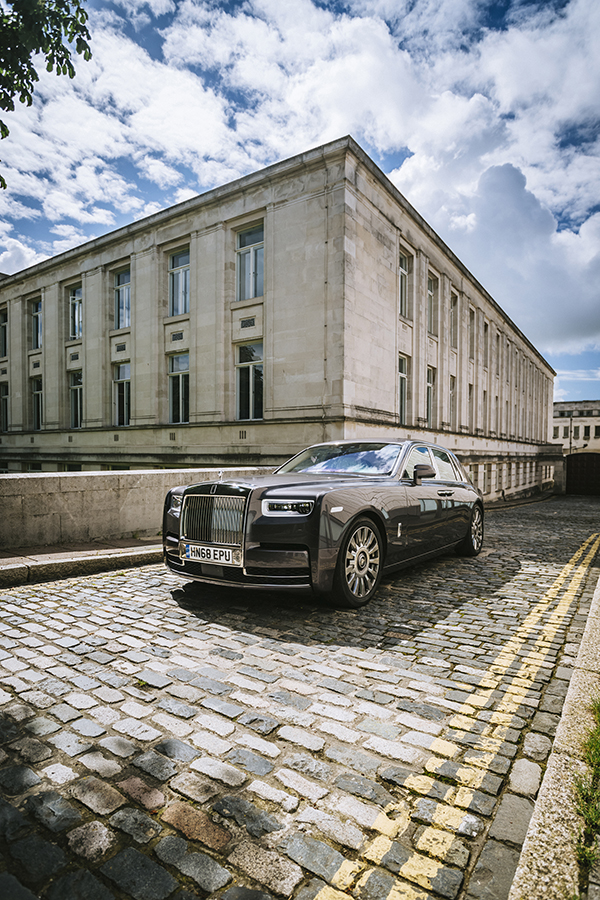 Once you've gotten used to the dimensions of the car it's time to drive like a real chauffeur. With the photographer in the back and a 'lead foot', this is quite a challenge. The Phantom VIII has a very soft suspension and that results in a truly unique experience on straight roads. There's a reason the people at Rolls-Royce call this a land yacht. The suspension reminds you of a yacht. Very comfortable but sometimes a little too comfortable considering the many roundabouts England has to offer. However, even with the soft suspension you know exactly what the wheels on the car do. It may not result in the most direct response, but it does result in the most comfortable ride imaginable, which, let's be honest, is what the Phantom is all about. 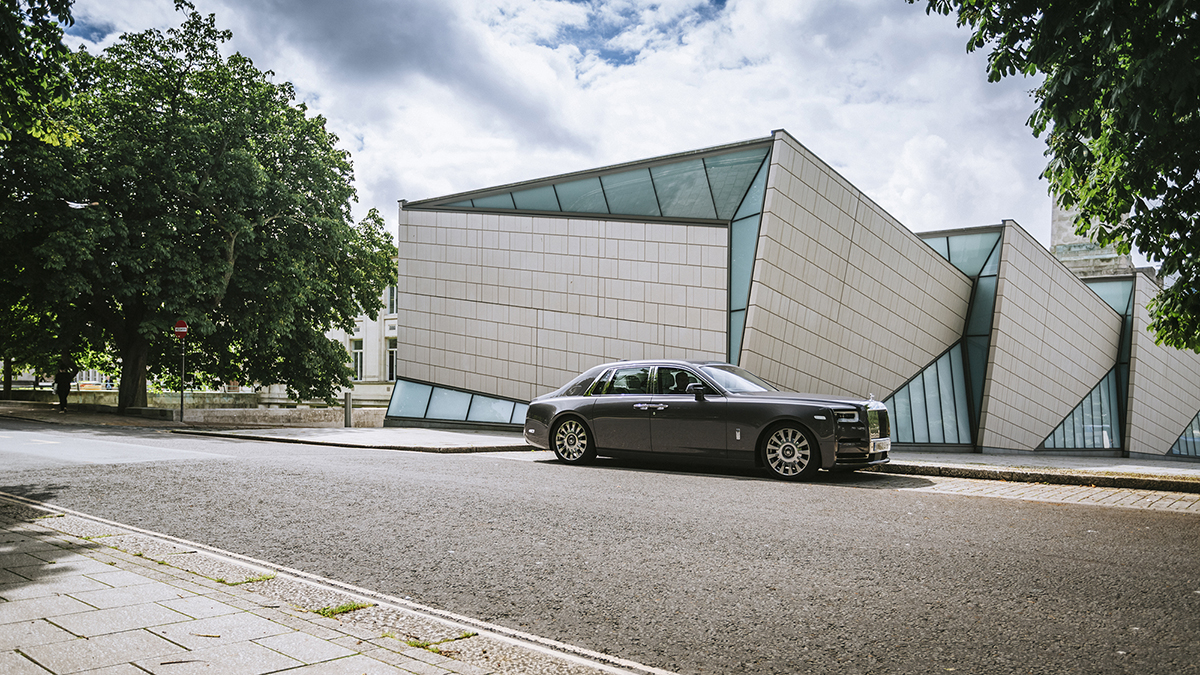 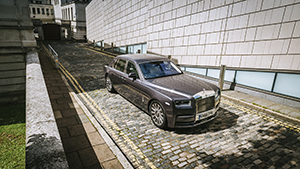 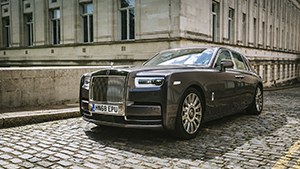 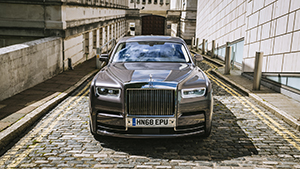 It must be noted that the Phantom has not been engineered only for the comfort of the people in the back. Rolls-Royces target audience is getting younger by the day, going from high 50s to low 40s. This is partially due to the introduction of the Black Badge series, made to persuade the new young and wealthy audience. These people usually choose to drive their own car, which is something we can only agree with. Experiencing the Phantom VIII is something that is truly unique. The easy with which the spectacular V12 engine manages to push around the 2500kg car to a limited top speed of 250 km/h is world class. And keep in mind you will have at least a 20% power reserve left at all times. Naturally we tested this out for ourselves. 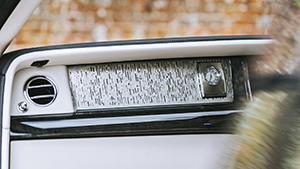 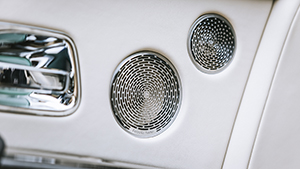 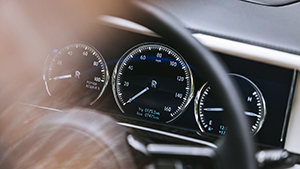 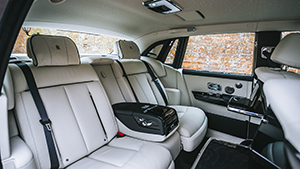 All this world class perfection does not come cheap. The model we drove has a price tag of 409.000 Euros, not including local taxes! The Phantom is loaded with options but it can always go further. The "gallery" in this car is not personalised but equipped with a brushed metal insert. Of course there is a cooler in the rear center console and the car has all media options, including DVD, HDMI and Android Screen Mirroring. The 22" wheels are also not standard. Naturally this car has Rolls-Royce's signature starry roof, complete with a custom star image or constellation. The stars are displayed by custom fibreglass wires, cut to fit to the custom pattern selected. As described the possibilities are literally endless and the 'standard' options are mostly fully customisable as well. This results in unprecedented sales figures. Last year Rolls Royce sold over 4100 cars of which the Phantom had the biggest market share. This year promises even higher numbers with the release of the Rolls Royce Cullinan. 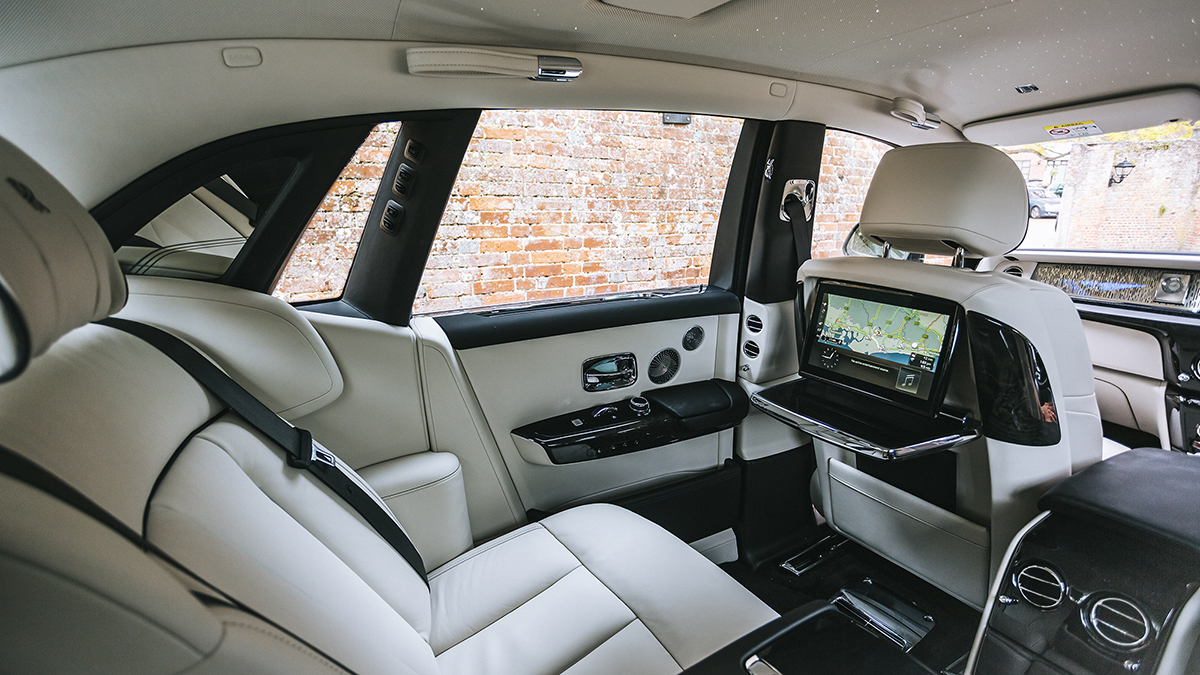