Sunday night 0:00 am, it is a night where you try to sleep as much as possible but you can’t, because of what is going to happen next day. On the road with an Italian bull isn’t happening every week. Besides that, the value of the bull is at least 400.000 Euros and has a massive V12 that drives the car. Off to Lamborghini Brussels, where we came face to face with this ruthless monster. The Lamborghini Aventador LP700-4.

It is a moment where the adrenaline rises to an unknown level. The feeling when they give you the key, with the message to return the Lambo the next day before 10:00 am, is like being thrown in the middle of the Pacific Ocean with only a life-jacket. A car is a car, but when you are going to drive a 400.000 Euro Lamborghini it is always nice to get some more information. That feeling quickly crawls away when you enter the cockpit of the Aventador LP700-4. The Lamborghini gives you trust in no time and all the buttons are on the right place. The most important button of them all has been given a striking red cap so you definitely will not miss it, the start button. The digital instruments come to life and give all the information that is necessary, including the oil pressure, oil temperature, cooling temperature, the speed and the rounds per minute the V12 makes. In the center console we find next to the start button three other buttons: Strada, Sport and Corsa. Every mode has its own character. Corsa is the mode where the Aventador LP700-4 is completely controlled by the driver. The gas response is quicker, the suspension is a lot stiffer and the ESP is shut down. The Sport mode delivers the same effects, but everything has its limits. The ESP is still active and this is the mode when you want to drive safe and fast with the Aventador LP700-4. 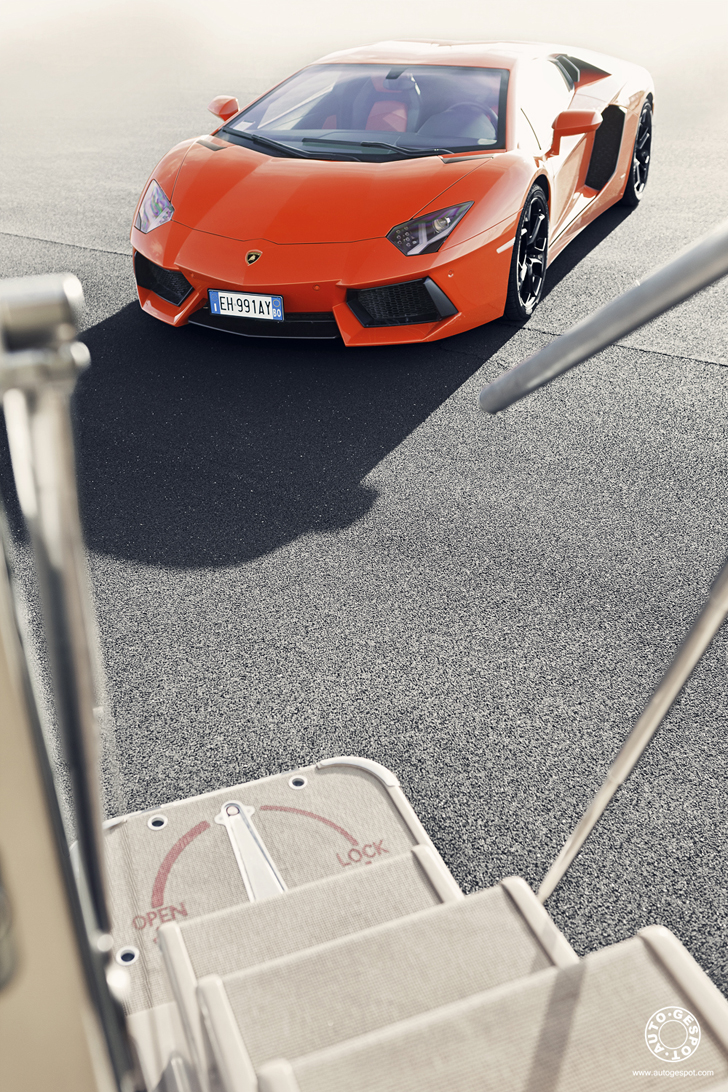 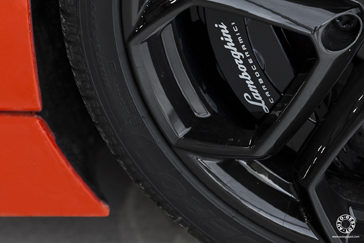 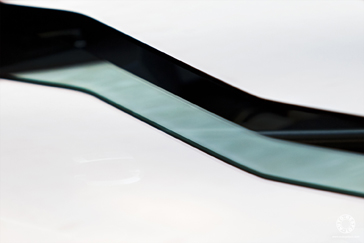 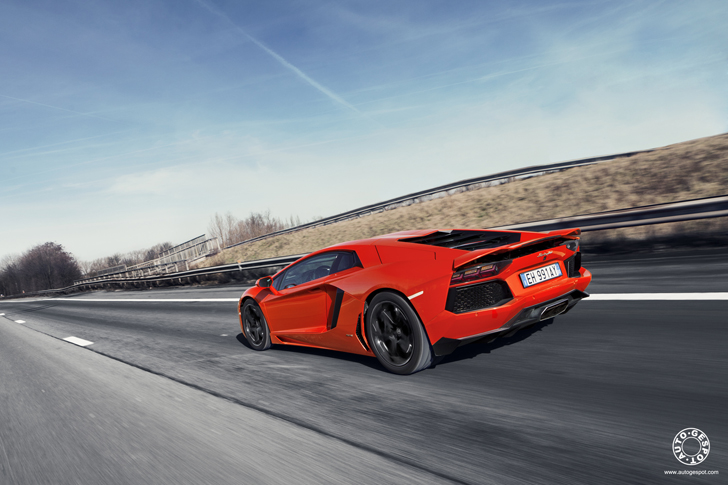 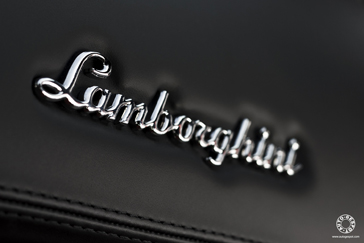 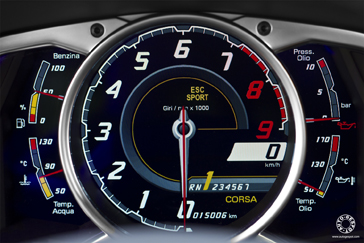 We go back to November 15th, 2010. The worldwide press receives the first press release in their mailbox. Lamborghini tells us that they are secretly developing a new supercar of which the V12 engine is already ready to use. Despite all other car manufacturers are downsizing, Lamborghini announces that they will still use the V12 in their supercars to keep the tradition alive. It started with the Miura, followed by the Countach and also the Diablo and the Murciélago had a V12. Lamborghini started with this V12 from scratch. The main points of the V12 were that it had to be lighter, stronger and more ecological. Of course Lamborghini is environmentally aware and the engine is twenty percent more fuel-efficient and eight percent more powerful than the V12 in the Murciélago LP640. Lamborghini was able to reduce the emission by developing a new cooling system. These are two tracks, one is closed when the engine is still cold and makes the engine warm up faster because less cooling oil goes through the engine. Because the engine will be warmed up faster, there is less friction and this has a positive effect on the emission and the corrosion. The second water track ensures that engine will be cooled when all the power of the car is used. 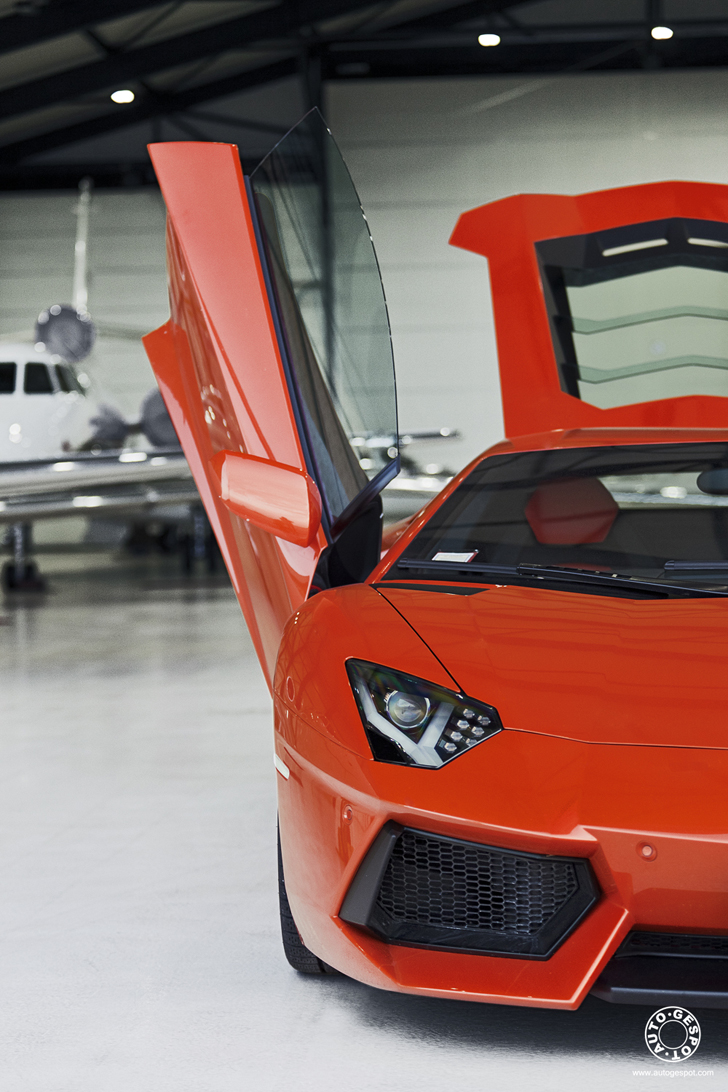 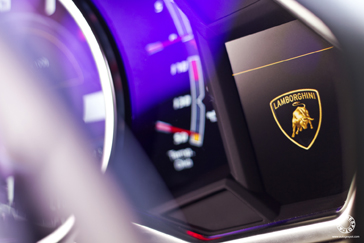 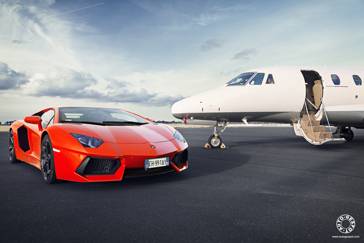 Not only the engine is redeveloped. For several years, the engineers at Lamborghini have been developing the latest techniques for the Aventador LP700-4. New techniques that are used are for example a light weight carbon fiber monocoque, Independent Shifting Rods (ISR) and the well-known push-rod suspension system. We have already seen this system in the Formula 1 and also Gumpert uses it in the Apollo. Lamborghini is definitely not the manufacturer that doesn’t know anything about carbon fiber. The guys from Sant'Agata Bolognese can be called the kings of the carbon fiber technology. The monocoque only weighs 235 kilogram. Extremely light and yet bizarrely strong! The ISR gearbox also is a “state of the art” piece of technique. It is of course not only the engine that defines the character of the car, but also the gearbox. The ISR gearbox developed by Lamborghini is 50 percent lighter than a normal dual clutch gearbox. It is not only lighter, but also a lot faster. The ISR gearbox is 40 percent faster than the E-gear gearbox from the Gallardo. 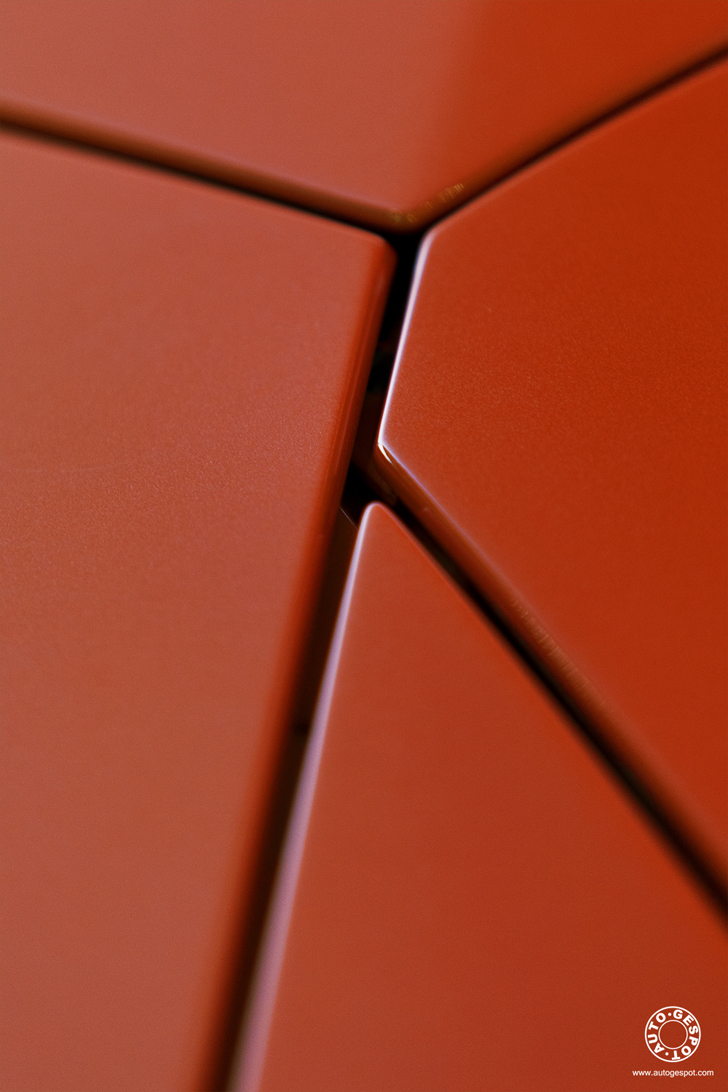 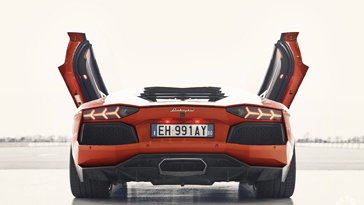 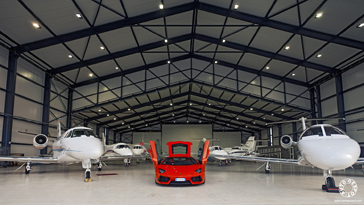 Al the techniques we have described provide a supercar that will be the measuring point for other supercars next decade. Also with this model we will see several versions like a Murciélago LP670-4 SuperVeloce based on the Murciélago LP640. We are sure we will see these versions of the Aventador LP700-4, because the 6,5 liter V12 will be able to deal with a lot more power. 700 bhp and 690 Nm of torque is just the start. The Murciélago started with ‘just’ 580 bhp and ended with 670 bhp. 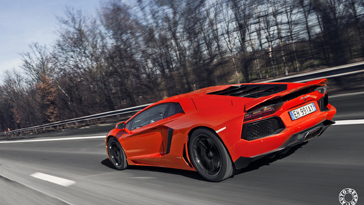 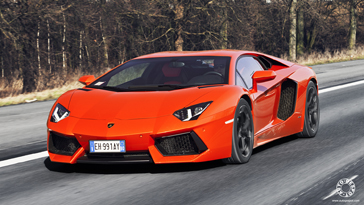 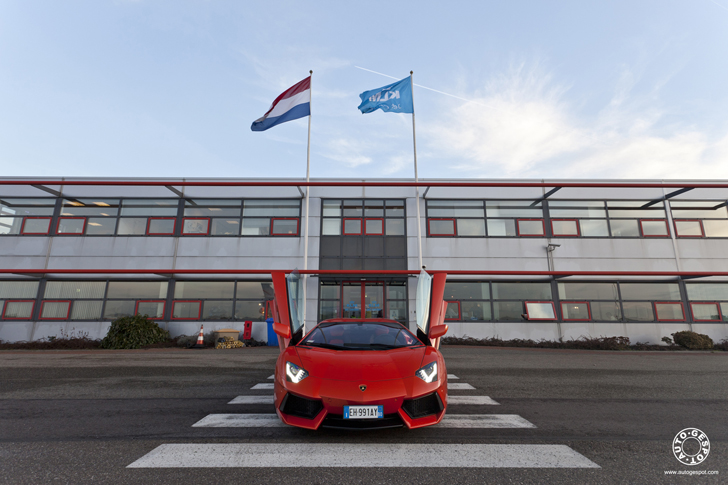 Where can we test the Lamborghini Aventador LP700-4 better than on a road where it is legal to go as fast as you want? Right, KLM Jet Center and Pressrelease B.V. were prepared to make Rotterdam Airport available for us to do what we had to do with the supercar that reaches 100 km/h in just 2,9 seconds and has a top speed of 350 km/h. Unfortunately, we were not able to reach the top speed, but we nearly hit 300 km/h on the 2,2 km long airstrip. 290 km/h was the highest speed we could reach and it is phenomenal to drive the Aventador LP700-4 on a speed like this. The acceleration and the sound from the engine at high rpm is indescribable! The adrenaline that goes through your body on that moment gives you a massive kick that makes your hands shake. Driving the Aventador LP700-4 is an indescribable experience. How can we ever describe the Aventador LP700-4 in the words Lamborghini does? This car is a phenomenon and will be a phenomenon during the next years until Lamborghini develops a new supercar with a V12. In the basements of Lamborghini, some engineers will probably already be working on this car. 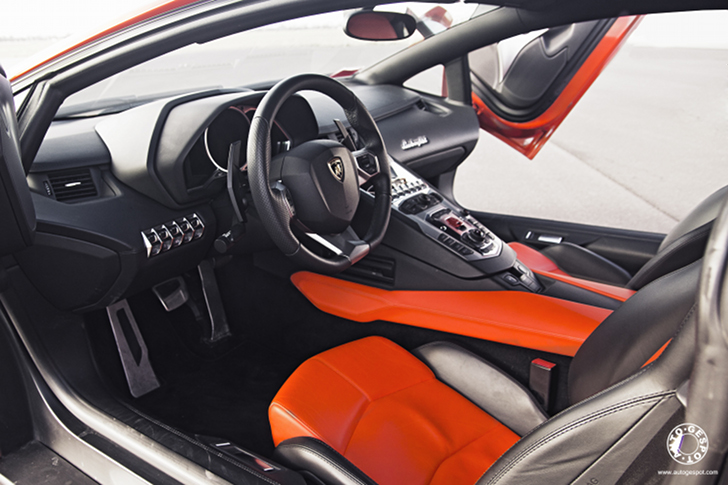 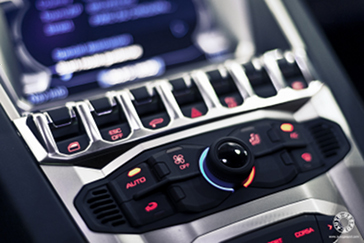 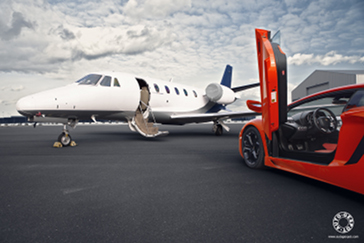 The Aventador LP700-4 we drove was painted in the color Arancio Argos. A superb color with different variations. In the sun, the color is bright orange, but when there are some clouds, the orange gets darker. In the darkness, there is even a brown glow over the car. Strange, but really cool! We think that we all agree that this is one of the coolest combinations for the Aventador LP700-4. The color fits the lines of the Aventador LP700-4 and the black parts and details make the car look even more aggressive than it already is. The back of the Lamborghini is totally extraterrestrial. On the highway it is nice to see the spoiler lifting up to give more downforce on the rear wheels. The greatest relief of this car is its handling. It isn’t the hardest car to drive, especially not when all safety systems are active. The four wheel drive ensures maximum grip but the systems measures which wheels need which amount of power every moment. Combine this system with the direct steering mechanism and you can go through all corners like a rocket. Not only the systems are important for the handling of the Lamborghini. Also the aerodynamics of the Aventador LP700-4 deliver enough downforce to keep the car on the ground. 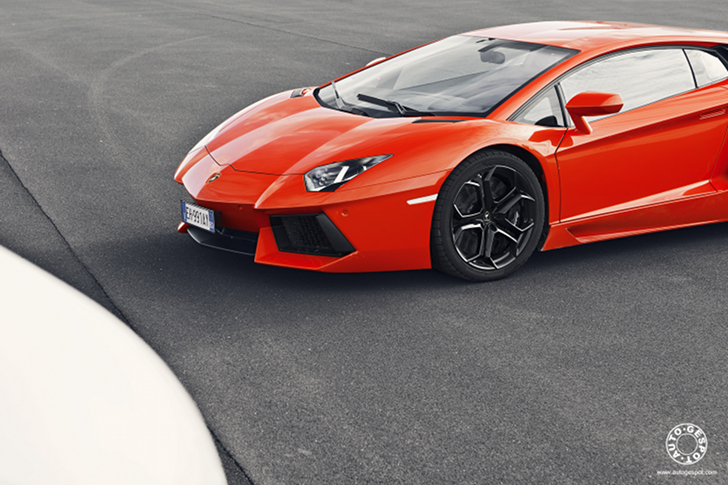 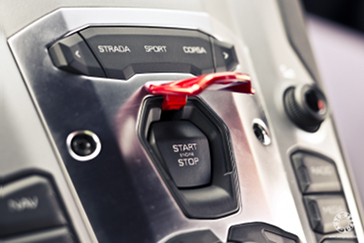 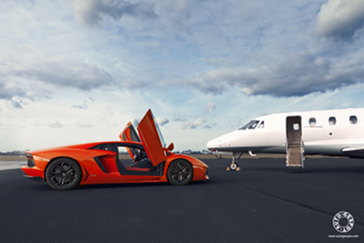 So far, the Aventador LP700-4 is the king of the supercars and it is on top of the list of the most wanted supercars. It’s beautiful sounding V12, the lovely direct steering and the fantastic cockpit are all elements that make you enjoy driving a Lamborghini. We can understand why somebody bought the Aventador J in Geneva this year. Is there anything better than cruising around with an open Aventador, whether we don’t know if the Aventador J will ever see daylight again. If there is something to complain about, then it is the gearbox. Driving at very low speed is difficult. When you’re driving faster than ten km/h, the gas response is more precise. At lower speed you have to be careful to move the Aventador LP700-4.

We would like to ask your attention for the following. We from Autogespot had the opportunity to use Rotterdam The Hague Airport because of the willingness of volunteers and a lot of car enthusiasts at the airport. The only compensation they asked was to ask your attention for [i]Stichting Kanjer Jayden[/i]. On the 28th of October in 2011, doctors discovered that Jayden has cancer in stadium 4. This means he has several tumors and disseminations. At this moment, Jayden is recovering and there is a possibility for Jayden to go to America for another treatment. This treatment can rise the chance of recovery with 20 percent. Therefore, we would like to ask you a small contribution for this foundation in order to increase the opportunities for Jayden!